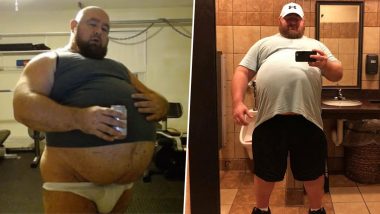 He is XXXL-rated! A 500-pound OnlyFans influencer who found immense popularity within the fat fetish community has revealed in reports that he has to eat around 10,000 calories a day to maintain his ‘ball gut’ and keep his followers entertained. Meet 44-year-old, Bryan, who goes by the name Gainer Bull on Instagram, from Palm Beach, Florida. He explained in reports how his weight gain turned sexual as a teenager as he started to realise that being bigger added to his arousal. The 44-year-old uploads pictures of his daily ‘loading sessions,’ with his thousands of fans on social media to entertain them. His comment section is flooded with people gushing over his elusiveness. OnlyFans Model Couldn't Sit for Four Months After Botched up Brazilian Butt Lift Surgery Says Don't Believe Fake Reviews.

It is not easy to maintain his massive, round gut. He consumes three large combo meals and at least three sides per meal, amounting to four times, the standard daily calorie intake for an adult male, the Metro reports. Bryan posts pictures of his belly to his Instagram page, much to the delight of thousands of his followers.

The erotic weight gainer gets $20 a month for posting on his OnlyFans account. It’s not only the diet food that is affected, but Gainer Bull also struggles to find clothes which perfectly fits his large stomach. In the report, he agreed to have outgrown a size 3XL. Despite his aim to continually gain, Bryan also noted the dangers of this and tries to mitigate it through eating a variety of food groups to get proper nutrition. “It’s a challenge, but it’s important to understand the risks involved with becoming such an extreme level of huge,” he added in the report.

View Pic of the Big Guy!

So much for 5xlt #gainerbull

Fat fetishism and feederism have been around in many spheres for as long as people have been exploring their sexuality. However, as Bryan rightly noted, one must keep a check on his/ her diet because there are risks involved in growing this big.

(The above story first appeared on LatestLY on Aug 14, 2020 09:19 AM IST. For more news and updates on politics, world, sports, entertainment and lifestyle, log on to our website latestly.com).