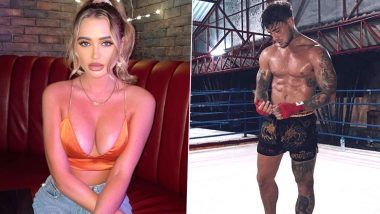 On Monday, Georgia took to Instagram stories sharing a statement thanking fans for their support and insisting she is "staying positive". It read: "Thank you to everyone that has reached out over the last few days. At this time, I am unable to comment on the recent events due to the ongoing criminal investigation. I am passionate about supporting victims of revenge porn and hopefully, by coming forward it will give others the courage to do the same. I have a fantastic team around me including friends, family and colleagues, who are just some of the many reasons I have [been] able to stay positive right now. Again, thank you so much for everyone’s love and support – you have no idea how much it means to me. G."

Love Island star Georgia claimed that he made a secret sex tape of her and that the alleged tape has even been shared on WhatsApp. However, he has now been arrested as Essex Police confirmed to The Sun that Bear remains in custody for questioning. Charges against him include "suspicion of disclosing private sexual photographs or films without consent with the intent to cause distress, harassment, and obstructing a police officer." Before this Love Island star, Harrison had even urged fans to send her evidence she can pass to the police as she had accused her ex Stephen Bear of posting a secret XXX sex tape on OnlyFans and even have it circulated on WhatsApp.

(The above story first appeared on LatestLY on Jan 19, 2021 02:49 PM IST. For more news and updates on politics, world, sports, entertainment and lifestyle, log on to our website latestly.com).