Gully Boy is based on the lives of rappers Divine and Naezy, who are known for bringing the rap culture into India. 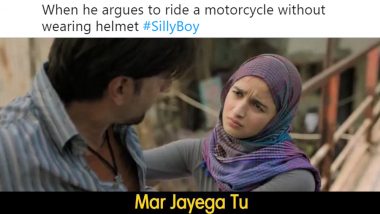 Mumbai Police has taken a reference from the upcoming movie Gully Boy to promote awareness of road safety. Directed by Zoya Akhtar, the trailer was released yesterday and fans can't stop praising Ranveer Singh's performance. As people obsessed over the trailer, a scene from it has inspired social media users to come up with hilarious memes.

And now Mumbai Police known for their witty and creative Twitter handle have followed suit to spread awareness on road rules. It's a scene where Alia Bhatt tells Ranveer Singh 'Mar Jayega Tu' (You will die) that has inspired the cops in their latest tweet. They captioned the meme saying: 'When he argues to ride a motorcycle without wearing helmet #SillyBoy.' Gully Boy Trailer: From Angry Rap Battles to Family Drama, Ranveer Singh and Alia Bhatt's Film Looks Arresting - Watch Video.

When he argues to ride a motorcycle without wearing helmet #SillyBoy pic.twitter.com/OPzycNdEAm

The cops often make use of popular Netflix shows, TV series and movies to spread awareness on road safety, especially the use of helmets. One of the controversial yet popular Netflix series 13 Reasons Why had also earlier found a way into their tweets. In the post too, the cops referred to how Hannah, the female protagonist refers to her classmate Clay as helmet because he doesn't ride his bike without one. Mumbai Police had then tweeted saying: 'If someone calls you by that name, take it as a compliment.'

Dialogues from the movie also inspired Nagpur police who also used it to promote the importance of following road rules.

When you are frustrated with the long countdown at the Traffic Signal...

Gully Boy is based on the lives of rappers Divine and Naezy, who are known for bringing the rap culture into India. Ranveer's character is loosely based on them who grew in Mumbai's; it shows the hardships he endured and how he inspired many around him into rapping. Gully Boy will be released on February 14 before which it will be premiered at the Berlin International Film Festival’s Berlinale Special category.

(The above story first appeared on LatestLY on Jan 10, 2019 04:17 PM IST. For more news and updates on politics, world, sports, entertainment and lifestyle, log on to our website latestly.com).