Gwyneth also made sure to state that she was "not, like, black-out" drunk, but she admitted she still craves a cigarette when drinking. These revelations have garnered mixed reactions online with people trolling her for talking about her problems of carbs and whiskey while people were literally losing lives. 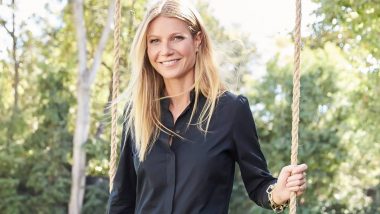 Gwyneth Paltrow in the news again and this time it is not for the 'vagina candles' BUT for making revelations about how she indulged in booze and even carbs during her quarantine period with her family. She revealed how she ate bread and binged drank a special quinoa whiskey drink that she calls 'Buster Paltrow' almost seven days a week. Gwyneth told The Mirror: "I was drinking seven nights a week and making pasta and eating bread. I went totally off the rails. I mean, who drinks multiple drinks seven nights a week? Like that’s not healthy. I love whiskey and I make this fantastic drink called the Buster Paltrow, which I named after my grandfather who loved whiskey sours. It’s this great quinoa whiskey from this distillery in Tennessee with maple syrup and lemon juice. It’s just heaven. I would have two of those every night of quarantine." Gwyneth Paltrow's Goop 'Vagina' Candles Reportedly Burst into Flames in a UK Woman's Living Room! Know More About the Ingredients found in the Controversial Candles.

Paltrow confessed to binging on pasta and alcohol after she had COVID-19 and blames it for her weight gain. Gwyneth also made sure to state that she was "not, like, black-out" drunk, but she admitted she still craves a cigarette when drinking. These revelations have garnered mixed reactions online with people trolling her for talking about her problems of carbs and whiskey while people were literally losing lives.

i honestly refuse to believe that Gwyneth Paltrow is a real person https://t.co/ZaudkEBs1u

I admire Gwyneth Paltrow’s talent in becoming somehow more unlikable every time I see a new story about her. pic.twitter.com/unW4mw4Evk

I broke down and read an article about Gwyneth Paltrow pic.twitter.com/wl7DPH7pZx

The low point of my pandemic was my mother dying during the summer (non-COVID) and not knowing how to deal with it. Bread was comfort.

Anyway, back to you, Gwyneth Paltrow.

A few weeks ago, she had opened about her personal experience of being diagnosed with COVID-19 and how she healed from it. The 48-year-old actor took to her Goop website and revealed that she had COVID-19 early on, and it left her with some long-tail fatigue and brain fog. Paltrow was battling long COVID-19 said to PEOPLE: "I've noticed over the past couple of years that my metabolism is slowed down. I know a lot of that is perimenopause. I'm 48 years old, and I know that women tend to lose up to 30 percent of their metabolic speed once we enter this phase of life, etc. So I know some of it is that. I think maybe some of it is because I got Covid. My physician in New York was saying that that was affecting a lot of his patients' metabolisms as well.

(The above story first appeared on LatestLY on May 11, 2021 10:39 AM IST. For more news and updates on politics, world, sports, entertainment and lifestyle, log on to our website latestly.com).