Hissssssterical! Man Spotted Wearing Snake Instead of Facemask on Bus in Salford, Video of Python Around Man’s Neck Goes Viral 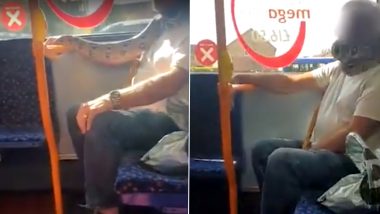 Photos of a man using a huge snake as a facemask on a bus have left social media users horrified. He had a python around his neck and face on a bus in Salford, Greater Manchester. He boarded the bus from Swinton to Manchester service on Wednesday. As the pictures went viral, passengers were shocked to see the reptile on the man. Following the incident, experts advised people against using snakes as face-covering during COVID-19. Shocking! Video of Fruit Seller Cleaning Fruits With Facemask Raises Concerns of Safety During The Pandemic.

The Manchester Evening News quoted a 46-year-old woman as saying, "He had it wrapped around his face like a mask getting on the bus. At first, I thought he had a really funky mask on, then he let it crawl around the handrails. No one was really bothered on the bus but a man behind took a video. It was definitely entertaining." Venomous Snake Removed From a Sleeping Man’s Shirt in Maharashtra (Watch Scary Video)

Man Spotted Wearing Snake as Facemask on a Bus:

Professor of Science Communication at the University of Gloucestershire Adam Hart told Metro UK, "There are, unsurprisingly, no studies of the effectiveness of snake masks but I think we can confidently say that this is not an effective way of reducing the spread of coronavirus. The gaps between the coils that allow the wearer to breathe will also allow virus particles to pass through. It is, quite frankly, a ridiculous face covering."

When asked what other dangers the of using a python as a facemask, Professor Hart was quoted, "From the photo, it looks like the snake is a large python so it isn’t venomous but instead kills prey by constriction." He added, "Likewise, if it decided to wrap itself around your head then it could well become very difficult indeed to breathe if your nose and mouth become tightly covered."

(The above story first appeared on LatestLY on Sep 15, 2020 07:55 PM IST. For more news and updates on politics, world, sports, entertainment and lifestyle, log on to our website latestly.com).