Is The Forest Breathing? Know the Reality of This Viral Video From Quebec

The video has gone viral on social media with internet users coming up with different possible explanations for the occurrence. 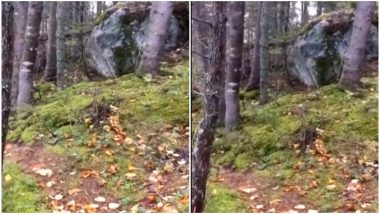 Does the forest breathe and act differently when nobody is watching? What could be a possible explanation for the video of trees moving up and down along with the ground? The video has gone viral on social media with internet users coming up with different possible explanations for the occurrence. The clip has garnered more than 3.63 million views and more than 76,200 likes on Twitter.

As various theories started during rounds, a Forbes report claimed that the video was shot in just an illusion created by air. The footage is from Sacre-Coeur, a province in the Quebec region. According to the report, strong wind also 'plays a role in moving the trees and the topsoil'. Scientists Make Same-Sex Mice Have 29 Babies Using Stem Cells and Gene Editing, View Pics!

The ground gets saturated with water during a storm. Thus when the winds move the top of the trees, the steam also join transferring the force to the roots and hence the ground also shakes. This generally happens with the spruce trees as their root system grows in the uppermost layers of the soil.

The ground looks like it's breathing in this Quebec forest. pic.twitter.com/AeETAYJOdN

If the wind is very strong, the tree will eventually be uprooted. These movements of the trees along with the ground can also trigger rockfall or mudslides in the forests. This occurrence is of great interest to the geologists just like to the common people. However, the video continues to go viral on Twitter with people exclaiming at nature's live action.

(The above story first appeared on LatestLY on Oct 23, 2018 08:18 PM IST. For more news and updates on politics, world, sports, entertainment and lifestyle, log on to our website latestly.com).