Jake Paul is now trending on Twitter! Paul takes on the former UFC fighter, Ben Askren at the Mercedes-Bens Stadium in Atlanta. Funny memes, jokes, hilarious posts and more, the microblogging site is filled with reactions on the celebrity bout, and you can’t miss it. 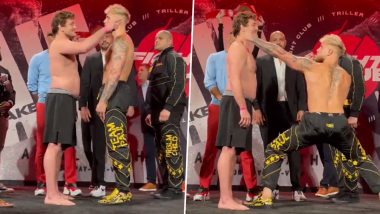 Jake Paul may not have done much, but he certainly proved himself that he has potential. Paul vs Ben Askren was probably one of the most hyped events in recent days. The YouTube sensation knocked out former UFC fighter in the first round in just under a minute. While such quick action left nothing much for viewers to react to, but they still did. Jake Paul is now trending on Twitter! Funny memes, jokes, hilarious posts and more, the microblogging site is filled with reactions on the celebrity bout, and you can’t miss it! No matter on whose side you were on, the reactions are pretty relatable.

Paul takes on the former UFC fighter at the Mercedes-Bens Stadium in Atlanta. The YouTuber has won his first two professional bouts, with knockout victories against fellow YouTuber AnEnsonGib and former NBA player Nate Robinson. Meanwhile, Askren retired from mixed martial arts (MMA) after he was defeated by Jorge Masvidal at UFC 239. When Paul announced his next bout, many people on Twitter trolled him and even derided his claims to be an ‘elite fighter.’ But he is determined to prove his credentials.

Paul still hasn’t fought a professional boxer in his short boxing career; with today’s first round, he now owns a knockout victory over a professional fighter! From the start of the event until his knockout victory, Twitter continued to have thoughts, and the reactions are hilarious. Funny memes and jokes flooded the timeline, and you just can’t miss it!

I knew deep down Jake Paul was gonna smash Askren, but desperately wanted Ben to win since he was such a likeable guy and Jake was a cunt. Ffs MANNNNN

The Fight Ended Too Soon

Everyone that illegally streamed the Jake Paul vs. Ben Askren fight only to have the fight end in 2 minutes:#TrillerFightClub

people who waited 4 hours for jake paul vs ben askren just for it to end round 1 pic.twitter.com/AjKiiw84QX

so we're not gonna acknowledge that the justin bieber performance was longer than the jake paul vs ben askren fight... pic.twitter.com/Cu59N3iNcr

That Wasn't Fair Though

Me watching Jake Paul vs Ben Askren and Robert Whittaker Vs Kelvin Gastelum at the same time #UFCFightnight #jakePaulvsBenAskren pic.twitter.com/lt7PShHDJU

I watched the @jakepaul vs @Benaskren fight illegally and still want a refund pic.twitter.com/YsoJKdQIWy

The YouTube sensation still needs to prove that he can compete against trained boxers, but so far, he is reasonable. Beating Askren, it remains to be seen if Paul will continue trying to establish himself as a legitimate boxer.

(The above story first appeared on LatestLY on Apr 18, 2021 12:54 PM IST. For more news and updates on politics, world, sports, entertainment and lifestyle, log on to our website latestly.com).