Karate Kid Breaking Tile in Half After Many Attempts As His Friends Cheer On Is All the Inspiration You Need Today! (Watch Video) 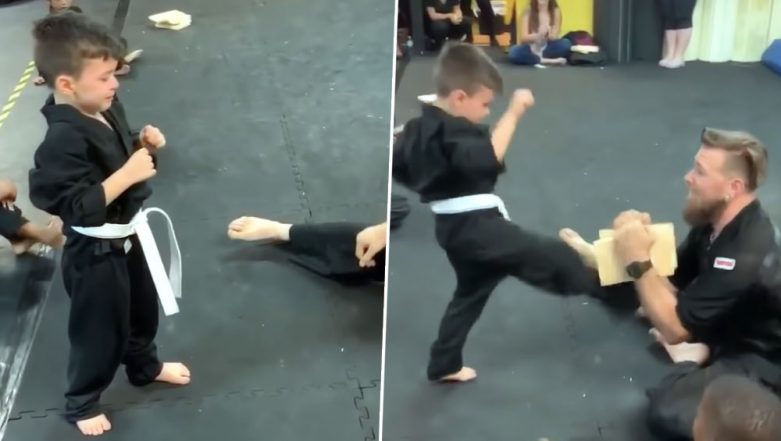 This video of a little boy putting in all his might during his karate class to break a tile, is sure to give you all the inspiration you need to finish that pending work. The clip from Phoneix, Orlando in Florida that is going viral on social media shows a young boy trying to break a tile at his karate class, but does not succeed. While the boy is crying and on the verge of giving up, his trainer is in no mood to let him go. His instructor Erik Gianni keeps encouraging the little one, while holding the tile for him. The boy also has a great group of friends at Bobby Dixon's American Martial Arts Academy who can be heard motivating the boy to not give up. Adorable ‘Peeche Dekho’ Boy’s Viral Video Is Spreading Cuteness All Over the Internet, People Compare the Little Pathan Boy to Taimur!

The video went viral on social media after it was shared by the child's mother Claudia Swonger on Facebook. She shared the video with the caption, "My boy learned one of the most important lessons in his life today! NEVER... EVER GIVE UP!" The video has over 16 million views and more two lakh likes. She shared the video on YouTube with the caption, "Phoenix did not have to break the board to advance but he wanted to. While it may have been a struggle, with encouragement, instruction, and lots of love, he overcame and advanced." Red Cross' Video of Afghanistani Boy Who Lost Leg in Landmine Dancing After Receiving Artificial Limb Goes Viral,

Eventually, the boy breaks the tile calling for celebrations at the karate class. He even fell a couple of times, but his teacher did not let him stop unless he broke the tile. The moment he breaks the tile, his friends run towards him and lifts him up in excitement. The video has generated a lot of heartwarming response on social media with people praising the boy's consistency that was fueled by his teacher.