The incident from Kerala shows a snake catcher rescuing a long python from a deep well! During the rescue, the man even fell into the water as he loosened his grip. This snake rescue is indeed dangerous as, at one point, the snake even coiled himself around the man. 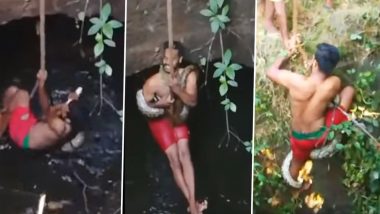 Snake rescue is not an easy task even if the person is well-trained and knows how to deal with the reptiles. While it may appear that snake catchers are rescuing them with ease, a video of a very daring snake rescue has come online. The incident from Kerala shows a snake catcher rescuing a long python from a deep well! During the rescue, the man even fell into the water as he loosened his grip. This snake rescue is indeed dangerous as, at one point, the snake even coiled himself around the man. Cobra Snake Gets Stuck in Beer Can at Odisha, Locals Rescue and Release it Into Wild (View Pics).

The man in the video is Shigil aka Sreekuttan who works as a forest watcher and has been working in tandem with forest officials from Peramangalam in Thrissur. Recently, he rescued a python snake from a 40-feet-deep well and that too with one hand. His other hand, held on tight to a rope with which he was climbing out. He grabs the snake by its tail and trying to climb up slowly and steadily. But just when he is about to reach the top, he lost the grip of the rope and splashed into the water with the snake in his hand. The daring attempt of snake rescue has been caught on video and it will give you goosebumps. Snakes on The Loose! 5 Times Slithering Reptiles Gave People The Fright of Their Lives (Watch Video).

The video was captured by locals and it ends abruptly. But both the snake and Shigil were fine and eventually reached the top safely. His first attempt was to use a trap but the snake kept moving away which is when he decided to get inside the well. He told Manorama news, "I asked the locals above to lift me up. But as I almost reached the top, I asked one of them to hold onto my hand. But I don’t know whether they got scared by the sight of the snake. As they held my hand, I lost my grip on the rope and fell down into the well." Some people commented if the snake was trying to constrict him but he denied. The snake was later let out into the Pattikkad forest.

(The above story first appeared on LatestLY on Dec 16, 2019 04:20 PM IST. For more news and updates on politics, world, sports, entertainment and lifestyle, log on to our website latestly.com).