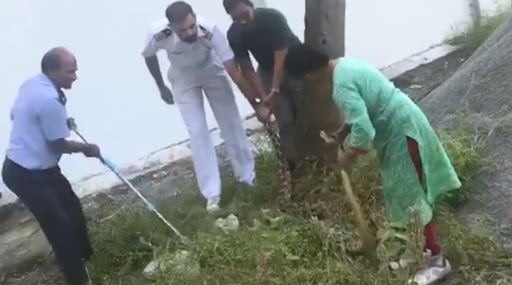 In a surprising incident, a woman is gaining the support and praises from the netizens for rescuing a big reptile in Ernakulam, with her bare hands. The video of her quick thinking and compassion is creating abuzz among the social media users, who rescued a python -- reportedly weighed 20kg. She is reported to be the wife of an Indian Navy officer.

According to the reports, Vidya Raju could be seen in the viral video handling the snake with great care, which she caught from a lawn in a residential complex in Ernakulam with her bare hands. Raju is reportedly the wife of a senior naval officer, and they reside in Tarangini apartments in Ernakulam. Ugandan Man's Farts Can Kill Mosquitoes 6 Miles Away, Hopes to Get Hired by Insect Repellent Company (Watch Video).

Seen afraid while rescuing the snake, Raju routinely assists in the rescue of reptiles and possess great skills in capturing the python and bagging it. The latest video became an internet sensation after it was shared on Twitter by Harinder S Sikka -- author of Calling Sehmat on which the film Raazi was based, reports Indian Express.

Leave aside women, wonder how many men can show such guts.

I love my Navy. pic.twitter.com/6XNUBvE7MU

Reports state that Raju has been closely associated with the forest department and is an experienced rescuer of wildlife. She helps the residents and assists in educating them on the rescue of the reptiles in the area.