The new discovery made about the long gamma-ray burst detected in December 2021 is all set to change theories regarding the origins of the universe's most powerful explosions. Check the tweet below for videos. 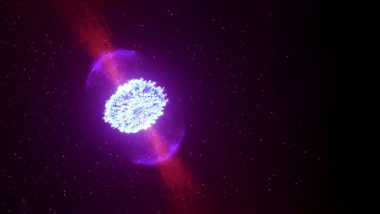 Scientists have made a new discovery that could change theories regarding the origins of the universe's most powerful explosions. A powerful 50-second blast of high-energy radiation called a long gamma-ray burst (GRB) was detected in December 2021 from a source 1.1 billion light-years away. That high-energy blast of radiation has now been traced back to the collision of two neutron stars and the kilonova explosion that resulted from the violent merger of stellar corpses. Check out this tweet for all the details. Halloween in Space? ESO Telescope Captures Gigantic Star's 'Ghostly' Remains; Spooky Pic of Vela Supernova Goes Viral.

(The above story first appeared on LatestLY on Dec 08, 2022 03:49 PM IST. For more news and updates on politics, world, sports, entertainment and lifestyle, log on to our website latestly.com).