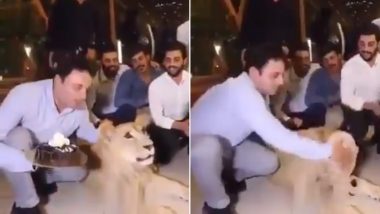 A Kurdish man celebrated his pet lion's birthday by smashing cake on the animal's face. The video of the incident which has gone viral on social media shows the lion lying on the floor with a group of men kneeling next to it for photographs. The next moment, one of them who is holding a birthday cake smashes it on the big cat on the lion's face making it startle. The shocked animal stands as people around it move away from it. The video shows the lion shaking off the cake crumbles from its face. World's Largest Cat, a Lion-Tiger Cross Breed Weighs 319 Kgs! Video of Apollo, The Huge Liger From South Carolina Goes Viral.

The video was widely shared on social media with people condemning the man's act. People also questioned him about the wild animal being kept in captivity. Blend Brifkani, the head of the Kurdish American Cooperation Organisation - a local NGO, owns the lion. According to Twitter users, he is a wealthy singer-turned-activist. He often posts pictures of him posing with the lion on his Instagram handle. American actor Dan Schneider tweeted the video with the caption, "Each and every person in this video needs to have cake thrown in their face, every hour on the hour, for the rest of their lives. Why is it so hard to #BeKindToAnimals?" Man Teases Lionness With Live Chicken in Gir, Gets Arrested (Video)

Each and every person in this video needs to have cake thrown in their face, every hour on the hour, for the rest of their lives. Why is it so hard to #BeKindToAnimals? pic.twitter.com/JT0QSfEMLd

After the video went viral inducing social media outrage, Brifkani in a video said that he did not mean to abuse the lion and addressed the animal as his 'very best friend'. The caption of the video posted on his Instagram says, "I have never intentionally intended to abuse Leo, moreover, I would never want to hurt him in any way. The footage shows pure emotions of overwhelmingness and excitement that I had while celebrating his birthday. He has grown to be my very best friend and I love him indescribably. (sic)"

Brifkani adds, "When I found him in the wilderness, he was alone, small and weak without a mother. If he had gotten into the wrong hands, he wouldn't have made it alive. I provided him a safe home, a good environment, veterinary care and everything needed to sustain the lions health until he grew.  My plan was never to keep him in captivity, but rather raise him until he was well enough and old enough to be let out into the wild again. (sic)"

He further says, "I admit, it was wrong for throwing a cake on the lions face, I have let my emotions of excitement take over me and I apologize to those whom I have offended. I’m not an animal abuser. He also said that he has an organisation which rescues endangered animals species, raises them and released them back to the wild. He ends saying, "I assure you that Leo is safe and will soon return to the wild. (sic)"

(The above story first appeared on LatestLY on Jun 11, 2019 12:32 PM IST. For more news and updates on politics, world, sports, entertainment and lifestyle, log on to our website latestly.com).