Manikarnika Teaser Has Got Hilarious Responses With Jokes and Memes Made on Kangana's Fierce Character, Check Funny Tweets

Kangana's bloodied face became the new meme target and a lot of funny jokes were made on it. 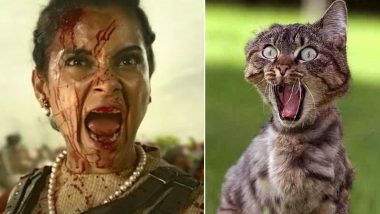 Kangana Ranaut's next film Manikarnika released on October 2 and fans of the actress only had praises for her. Playing the character of Jhansi Ki Rani, the 2-minute teaser, showed quite a fierce side of the actress. Known for her acting prowess, the actress might have collected a lot of praises, but along with a share of memes. Kangana's bloodied face became the new meme target and a lot of funny jokes were made on it.

The film is directed by Krish Jagarlamudi, sees Kangana in the character of Rani Laxmibai of Jhansi. The teaser is powerful and shows Kangana brilliantly fighting with her sword. But meme makers had a field day on Twitter, taking her expressions and the controversies she is involved in. Manikarnika Teaser Review: Twitterati Says Kangana Ranaut Movie's VFX is Better Than That of Thugs of Hindostan Trailer!

Check out some Funny Jokes and Memes on Manikarnika Teaser

When your brother removes your phone and puts his phone on charging: pic.twitter.com/5xTA3rxwnl

When dentist checks mouth vs when he removes a teeth.😂😂 pic.twitter.com/y8Khh22yIn

The big battle is here!

It seems like somebody was whispering "Hrithik ne tere 3000 mails ko ignore kardiya" in her ear throughout the shooting of this film 😂😂#ManikarnikaTeaser pic.twitter.com/YcLIFvTYhY

The film also stars actress Ankita Lokhande as Jhalkaribai and Atul Kulkarni as Tatya Tope, Suresh Oberoi in the role of Peshwa Bajirao. The film Manikarnika: The Queen of Jhansi will release on January 25, 2019.

(The above story first appeared on LatestLY on Oct 03, 2018 01:44 PM IST. For more news and updates on politics, world, sports, entertainment and lifestyle, log on to our website latestly.com).