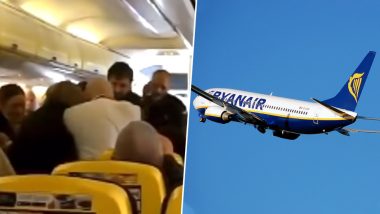 Reading about mid-air flights among passengers is not too novel, but a recent incident is quite shocking! A fight between two passengers on a Ryanair flight from Glasgow Prestwick to Tenerife South got so serious that the man's nose was bitten off! What's even more shocking is the trivial reason this fight started off in the first place. The fight started with a woman not wearing her shoes. The two men were later detained by the police but the mid-air brawl was too shocking for other passengers as well the crew. A video from this fight was also shared on social media. Man Runs After a Ryanair Flight at Dublin Airport Yelling at Pilot to Stop, Arrested.

As per a report in DailyMail, one of the men was drunk and was creating a ruckus from the start. The drunk man had an issue when a woman went to the toilet without wearing her shoes. He said that someone would stand on her toes when the woman's boyfriend got in between them. After they went back to their seats, the man drank again and started mouthing foul things at them. Apparently, both the men were drunk which made things uglier. The other passengers also screamed at the two men to stop fighting but matters only got worse, which left one of them with a bloodied face. According to a passenger, his nose was bitten. One of the passengers recorded the entire thing. American Airlines Passenger Creates Ruckus Mid-Flight as he Was Denied Beer.

The other families on the plane, including a young boy were too scared by the turn of events. The cabin crew also got in between to handle the situation to pull them apart. Speaking about this incident Ryanair's staff said, "The crew of this flight from Glasgow Prestwick to Tenerife requested police assistance upon arrival after two passengers became disruptive in-flight. We will not tolerate unruly or disruptive behaviour at any time and the safety and comfort of our customers, crew and aircraft is our number one priority. This is now a matter for local police."

(The above story first appeared on LatestLY on Mar 18, 2019 10:38 AM IST. For more news and updates on politics, world, sports, entertainment and lifestyle, log on to our website latestly.com).