'May the Fourth Be With You': Netizens Celebrate Star Wars Day Amid Tough Times with Fun Pics & Video

May 4 is a special day for all the Star Wars fans. They celebrate the day as Star Wars Day. Now, read on to know more about what netizens are up to on ‘May the Fourth’ in 2021. Also, know what follows next for the fans as they also gear up to observe 'Revenge of the Fifth' on May 5. 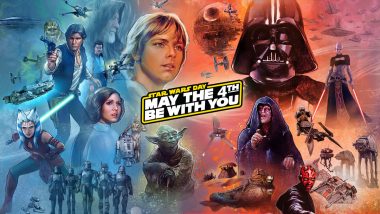 The fans of Star Wars film franchise across the world are celebrating Star Wars Day on May 4, 2021. This year, despite the tough times they have come forward to celebrate the special day but virtually. Every year Star Wars Day is observed by the fans on May 4. And like every year, they took the initiative to use the phrase “May the Fourth Be With You” in their tweets and posts related to the event. Did you know this phrase “May the Fourth Be With You” has been derived from one of the iconic catchphrases by Jedi from the Star Wars film, “May the Force Be With You.”

In 1977, George Lucas brought the American epic space opera film Star Wars on the silver screen under the banner of Lucasfilm. Later, its parent company Disney has organised several special events and celebrations for Star Wars Day on May 4. This year to celebrate the special day with the fans of the franchise, Disney Plus will be releasing the first season of Star Wars: The Bad Batch and the Star Wars-themed Simpsons short “Maggie Simpson in ‘The Force Awakens From Its Nap,’” along with two virtual artworks. With so much going on, the excited Star Wars fans have flooded social media with interesting pictures and videos related to the franchise. Even the hashtag 'May the Fourth Be With You' is also trending on Twitter.

Let us look at how die-hard fans of the Star Wars are celebrating ‘May the Fourth’ on Twitter:

Happy Greetings to All

It’s the 4th of May! So... Happy the fourth of May everyone. Live long and prosper. So say we all. #StarWars #MayTheFourthBeWithYou pic.twitter.com/mAtfpdr2zU

We Think So Too

“May the 4th be with you. And also with you. You may kiss the bride” .... I think that’s how it goes. #starwarscatholicmashup #starwars #MayThe4thBeWithYou pic.twitter.com/tf4gjYCF8A

My Heart, My Heart

I had to post pictures of my favorite character ever pic.twitter.com/jxVJOfi2u6

your thoughts betray you, father. i feel the good in you, the conflict. #MayThe4th #MayThe4thBeWithYou #StarWars pic.twitter.com/jRc5gCkuhy

Photo of the Day

Photo of the Day: The Millennium Falcon at 10,000,000ft above Hitchin (UK) as it lines up to refuel from the Deathstar #MayThe4th#MayThe4thBeWithYou

Photographed from a Canberra pic.twitter.com/gxmRt3XzO4

Star Wars Day on May 4 has now become an official holiday and it is even recognised officially in California. On May 4, fans of the franchise often binge-watch all the movies Star Wars, which are interestingly titled as 'episodes'.

(The above story first appeared on LatestLY on May 04, 2021 03:32 PM IST. For more news and updates on politics, world, sports, entertainment and lifestyle, log on to our website latestly.com).

Comments
Tags:
Festivals And Events May the fourth May the Fourth Be With You Revenge of the Fifth Simpsons Star Wars Star Wars Day 2021 Star Wars Film Series Star Wars: The Bad Batch
Comments
You might also like