Melbourne Woman, 38, Smashes Victorian Female Police Officer's Head Taking Off a Clump of Her Hair When Questioned on Not Wearing Facemask, Released on Bail! 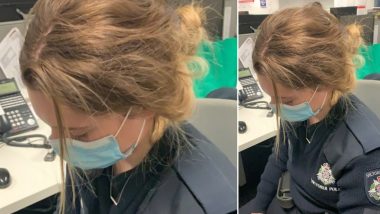 A woman has allegedly smashed a police officer’s head onto a concrete slab for being asked why she wasn’t wearing a face mask. The incident took place near Bayside Shopping Centre in Frankston, southeast of Melbourne, on Monday. While patrolling, the 26-year-old policewoman and her partner noticed the woman sitting and not wearing a face mask. On being question, she hit the officer badly. The 38-year-old woman's assault left the police officer with a concussion and a missing clump of hair, Police Association of Victoria secretary Wayne Gatt said. He said, "The offender had a clump of our member's hair in her hands and said to our member 'what's it like to have your hair in my hands' or words to that effect." The woman was however arrested and will face charges other than $200 fines for not wearing a facemask during COVID-19 pandemic. She had no previous criminal history and was granted bail to appear before the Frankston Magistrates' Court on March 31, 2021. IPS Officer Hurt as Group of People Attack Police Team Enforcing Lockdown in UP's Bareilly; 8 Held.

She was charged with nine offences, including two counts of assaulting an emergency worker and one count of recklessly causing injury. Talking about the incident, Premier Daniel Andrews described the behaviour as “appalling” and “shameful conduct”. Victoria Police Chief Commissioner Shane Patton said the woman’s alleged behaviour was "totally unacceptable". He also took the moment to highlight the challenges police were facing while enforcing coronavirus rules.

Photo of the Police Officer Who Was Attacked:

This 26-year-old Constable returned to the station concussed and missing a clump of hair.

Because she asked someone to wear a mask.

The Chief Commissioner says there are a small group of Victorians who consider themselves 'sovereign citizens'.

This includes a 38-year-old Frankston woman who seriously assaulted a 26-year-old female police officer after refusing to wear a mask. #9News pic.twitter.com/Dg8HNkId7m

Following the incident, Andrews said that tougher penalties will be issued to people found flouting lockdown quarantine rules. A fine of $4957 will now be issued to those who have breached any self-isolating norms that were given to them.

(The above story first appeared on LatestLY on Aug 04, 2020 03:37 PM IST. For more news and updates on politics, world, sports, entertainment and lifestyle, log on to our website latestly.com).