At least, 30 swingers gathered at New Orleans, a city in the US state of Louisiana last month to spread ‘love’ in the time of coronavirus pandemic. They ended up spreading the virus instead. Sex convention, Naughty in N’awlins turned COVID-19 super spreader event has seeded dozens of new cases of the virus. 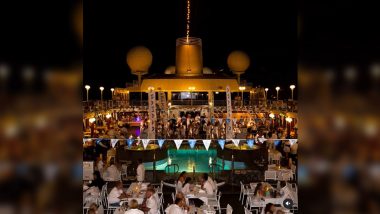 Despite the fact that we are in the middle of a pandemic, many gatherings were organised this year, making it even more challenging to contain the virus. COVIDIOTS are making it impossible to curb the further spread of COVID-19, the disease caused by the novel coronavirus, which so far has infected millions across the world. According to the latest reports, approximately 30 swingers gathered at New Orleans, a city in the US state of Louisiana last month to spread ‘love’ in the time of coronavirus pandemic. They ended up spreading the virus instead. Sex convention, Naughty in N’awlins turned COVID-19 super spreader event has seeded dozens of new cases of the virus. At least 41 revellers who attended the event were tested positive for COVID-19.

Amid the pandemic, when eventually, things started opening up, following a lot of precautions, COVIDIOTS were spotted making it riskier. We have seen people flouting social distancing, and it is not limited to one country. Where public places are reopening adhering to the guidelines, unfortunately, few individuals were captured disrespecting it. When UK government imposed updated guidelines in September, 2020, including early closing of restaurants, bars and pubs, huge crowds gathered on the street for ‘impromptu party,’ without wearing masks or following social distancing.

In November, the sex convention, Naughty in N’awlins was organised, and it attracted about 300 people despite the ongoing pandemic, for four-day of sex. There were no ‘playrooms’, and the organisers said they would have staff-on-hand to break up groups of nine or more, if they ever saw them. Organiser Bob Hannaford insisted in reports that the company had safety protocols in place, but in the blogpost updated recently, he expressed his regret at hosting the event after learning 41 people were tested positive for the virus.

Pics From the Sex Convention:

“When we contacted the people that were positive, we asked them several questions to find more potential positive cases and try to find out where the biggest risks took place. In almost every case, they admitted to us that they were super diligent on the first two days (Wed & Thurs) and then they relaxed a little on Friday and then they said “F**k it, it’s our last day,” Hannaford wrote in the blog.

The annual convention typically draws around 2,000 attendees in the summer, but this year’s convention came down to about 300, and it was held from November 11 to November 15. It is not clear as to how many staff at the NOPSI hotel, where the event was held, might have come down with the virus. Despite risking so many lives, the company is already selling packages for August 2021. The swinger party is one of the several large gatherings that have drawn criticism in recent months, after the United States saw a growing second wave of the virus. Meanwhile, New Orleans has tightened up its rules around public gatherings amid another spike in COVID-19 cases.

(The above story first appeared on LatestLY on Dec 03, 2020 04:38 PM IST. For more news and updates on politics, world, sports, entertainment and lifestyle, log on to our website latestly.com).