Nike Go FlyEase, the sneakers take accessibility to a new place, offering the first fully hands-free shoe. The company is earning praises online for their accessibility regardless of the wearer’s physical abilities. 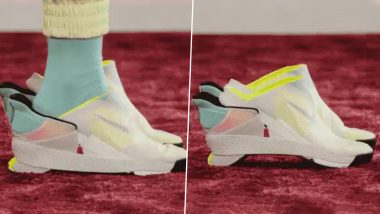 The celebrated shoe brand Nike is making headlines for its latest design created for people with all abilities. The brand has made it physically more comfortable to get into the shoe. Dubbed as Nike Go FlyEase, the sneakers take accessibility to a new place, offering the first fully hands-free shoe. The company is earning praises online for their accessibility regardless of the wearer’s physical abilities. Some people on Twitter call it a ‘disability design for the win,’ or others are all in applauds with Nike's latest line of shoes. But where the footwear brand find its inspiration? Well, it was a vision of a young boy, and the company finally made it possible.

Nike Go Fly Ease’ origin can be traced back nearly a decade to when a boy with cerebral palsy wrote a letter to the brand. Mathew Walzer, now 25, was born two months premature. According to reports, his lungs were not fully developed, due to which his brand did not receive enough oxygen. This lack of oxygen led to brain injury, which resulted in cerebral palsy. It is a group of disorders that affect a person’s movement, balance and posture.

In 2012, Walzer wrote a letter to Nike detailing how no athletic brand had thought to create sneakers adapted for people with disabilities like him. “Out of all the challenges I have overcome in my life, there is one that I am still trying to master, tying my shoes,” he said in that letter, as per Good News Movement. He explained, “Cerebral palsy stiffens the muscles in the body. As a result I have flexibility in only one of my hands which makes it impossible for me to tie my shoes. My dream is to go to the college of my choice without having to worry about someone coming to tie my shoes every day.” Nishtha Dudeja, First Indian Miss Deaf Asia Says, ‘We Want Equality, Not Sympathy,’ in a Strong Comment.

Then 16-year-old Matthew Walzer, who has Cerebral Palsy, wrote to Nike in 2012 saying he was disappointed no athletic brand had thought to create sneakers adapted for people with disabilities like him. (1/2) pic.twitter.com/fFiNMvVjry

Nike was moved by the letter. That same year, the company designed a shoe that used a zipper rather than laces. Finally, the company introduced Go FlyEase design. The ease of the wear would be attractive to anyone, but it is designed especially for those with a limited range of physical abilities. The wearer can easily slip in and out of the shoe without bending over. As the foot slides in and presses down on the heal, the shoe fastens with its patent-pending, ‘bi-stable hinge and midsole tensioner,’ like a rubber band around the sneaker that expands your foot, as per the company. To slid out, step on the heel’s ledge, with the opposite foot and the hinge releases to allow the foot slid out.

People Are All in Praises!

Because of my disability I don’t have all my fine motor skills which means I can’t my tie shoes. I usually would have to get somebody else at the gym to tie my shoes pre-pandemic. I’m looking forward to this. The price point is a little high for some people but I’m OK with it.

'Disability Design' For the Win!

Disability design for the win!

In 2012, Matthew Walzer, a teen with cerebral palsy, wrote to Nike asking for athletic shoes for disabled people. Nike invited him to collaborate in the design of the original adaptive Nike FlyEase shoe. https://t.co/0S3cAUhCCY

#DisabledLivesMatter The Flyease is for people of all abilities. Remarkable that one letter almost nine years ago continues to bring about so much change. #NikeLetter https://t.co/L9qZ9dTwDd

Some Are Worried About the Price Tag!

These are AMAZING, but I'm worried that the price tag on them might make them inaccessible to many of those who need them the most.

The latest collection surely touched shoe lovers across the world. With a price tag of $120 (Rs 8,756 approx.), the shoe officially drops on February 15, 2021, to the Nike members, before a wide release.

(The above story first appeared on LatestLY on Feb 03, 2021 03:56 PM IST. For more news and updates on politics, world, sports, entertainment and lifestyle, log on to our website latestly.com).