Ocean City Ban on Topless Women at Beach Upheld by Judge, but Should Society Differentiate Between Male and Female Breasts?

Topfreedom is not a new concept, and there are a number of revolutionary instances that challenged the notion of the social and legal attitudes against females’ exposing their nipples in public as ‘immodest.’ Should society continue differentiating between male and female breasts? 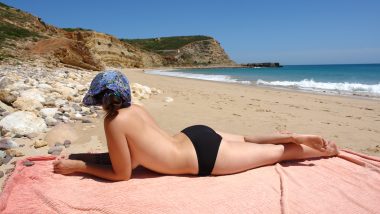 Ocean City, a town in Maryland, and its long-known controversy around females going topless in public at beaches has taken a new turn. As per the latest developments, a federal judge has upheld the 2017 ban on women roaming bare chest at one of the East Coast’s popular beach destinations, rejecting arguments from five women that the local ordinance is sexist. Both the United States Supreme Court precedent and the protection of public sensibility were cited as grounds for its legality in Tuesday’s ruling. Ocean City officials defended the rules of men being shirtless and not women, as necessary to maintain the town’s ‘family-friendly’ image. Topfreedom is not a new concept, and there are a number of revolutionary instances that challenged the notion of the social and legal attitudes against females exposing their nipples in public as ‘immodest.’ Should society continue differentiating between male and female breasts? ‘The Rapist Is You’ Chilean Protest Song Against Sexual Violence and Victim-Shaming Goes Viral.

“Whether or not society should differentiate between male and female breasts is a separate inquiry from whether it is constitutional to do so,” Chief US District Judge James K Bredar wrote in his 19-page opinion. He further stated, “Protecting the public sensibilities from the public display of areas of the body traditionally viewed as erogenous zones—including female, but not male breasts—is an important government objective.”

Chelsea C Eline and four other women in January 2018 with attorney Jason Downs filed a lawsuit. The fight over female toplessness, as we mentioned earlier, has been on for decades. GoTopless.org has been actively acting as a network for advocates and tracking the issue since 2007, when an NYC-based artist reached a settlement with the city after they arrested her for being topless in public. Hundreds of Women, Men in US March Topless for Gender Equality.

Should Society Differentiate Between Male and Female Bare Chest?

Many societies consider women exposing their breasts in public as immodest and contrary to social norms. We often come across news reports citing incidents where women were refused service or harassed for breastfeeding in public. Topfreedom activists aim to change the community attitudes towards breasts as a sex object or indecent. If a man is allowed to be topless in public, a woman should be able to do the same and have the same constitutional right. Otherwise, men should wear something to hide their chest. The social stigma around women and how they should behave or what they should wear has to end. In the name of decency and ‘family place,’ women are being denied equal rights as that of men.

We are totally fine commodifying a woman’s chest to make sells and for entertainment but we are not okay with her being topless and retain her humanity. All they get instead is a constant fantasy of female sexuality. It doesn't necessarily mean that women will go topless, but it's important they have the choice— and for that choice to be respected. Breasts are body parts, just like a man’s chest that we all have to live with every day. However, the latest ban on women being topless at Ocean City deepens the matter, and now nudity is an offence, but not for men.

(The above story first appeared on LatestLY on Apr 09, 2020 03:42 PM IST. For more news and updates on politics, world, sports, entertainment and lifestyle, log on to our website latestly.com).