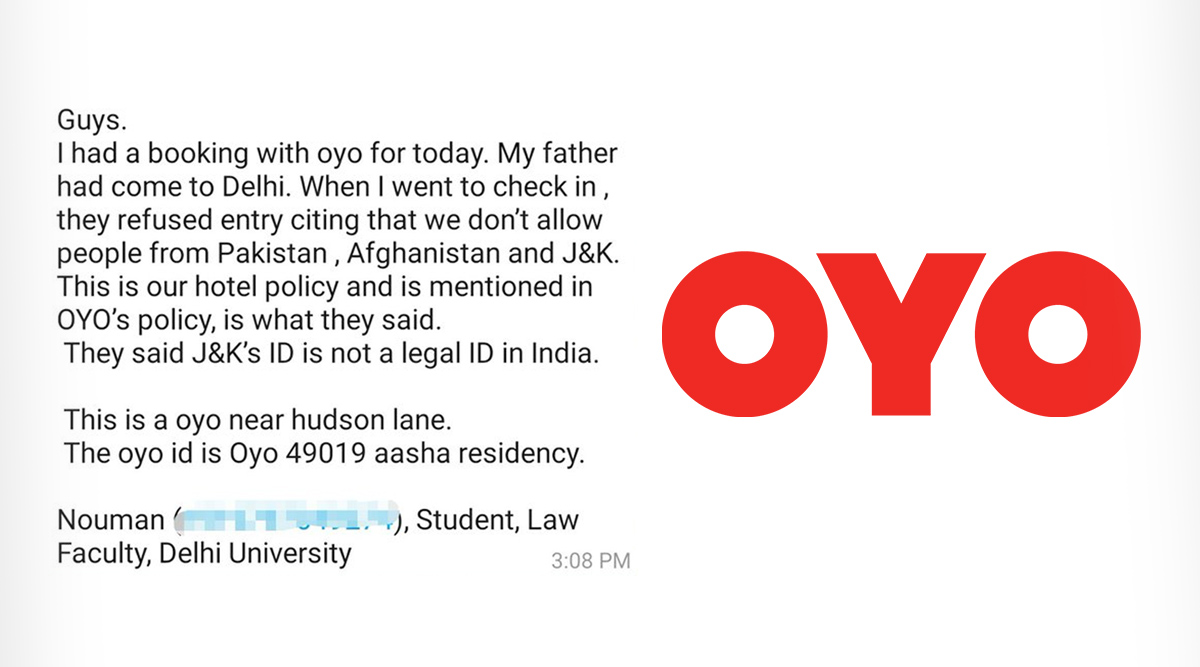 New Delhi, February 16: A man from Jammu and Kashmir has alleged that OYO Rooms cancelled his booking for a room, citing "directives" from the Delhi Police. Screenshots of a message from Nouman is going viral on Twitter. In his message, Nouman alleged that the hotel, Asha Residency, cancelled his booking done through OYO Rooms, saying they don't allow people from Pakistan, Afghanistan and Jammu and Kashmir. Jammu And Kashmir: Ban on 3G, 4G Internet Services Extended Till February 24, Social Media Remains Blocked.

According to Nouman, he had booked a room at Asha Residency through OYO for his father and sister who were visiting Delhi. However, they were sent back. "When I went to check-in, they refused entry citing that we don't allow people from Pakistan, Afghanistan and J&K. This is our hotel policy and is mentioned in OYO's policy, is what they said," Nouman, who is a student of law at Delhi University, alleged. He further claimed that the hostel staff told him that ID of Jammu and Kashmir is not "legal" in India. OYO Appoints Former IndiGo President Aditya Ghosh as CEO India & South Asia.

this is verified info. apparently oyo has a policy of not accepting guests from J&K (alongside afghanistan and pakistan). i can share nouman's number with anyone who wishes to speak to him. meanwhile hi @oyorooms please confirm this policy. pic.twitter.com/l0Kf4s2IpX

A Twitter user who apparently spoke to Nouman said that OYO Rooms cited "orders" from the Delhi Police for cancelling the booking. "When Nouman asked OYO Rooms where would his father and sister stay, the hotel staff said they don't have scanner and Delhi Police have ordered not to give room to people from Jammu and Kashmir," he wrote.

OYO Rooms Cites Delhi Police 'Orders' of No Bookings to People From Pakistan, Afghanistan And Jammu And Kashmir:

Many questioned OYO Rooms and sought clarification that a Kashmiri was denied a room. "Please clarify your policy once and for all, and also why these guests were turned away @oyorooms. it will be good for everyone to know so there's no confusion (sic)," a Twitter user said. OYO Rooms has so far not responded.