Pet Sitter Caught Naked on Doggie Cam and Allegedly Having Sex With Her Boyfriend at Client's House in California, Watch Video 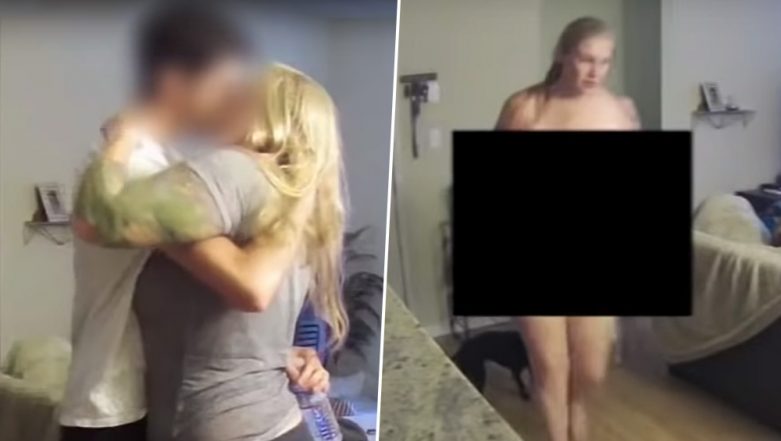 Getting a pet sitter to look after your pooches while you are away from home is a great option to ensure they do fine. But for a lady named Rosie Brown from California, it turned a shocking experience, when her pet sitter Casey Brengle ended up using their house for something beyond pet sitting. Brengle, a 26-year-old, who had a 5-star rating on pet sitter app Wag! used her client's house to get cosy and intimate with her boyfriend. The doggie cam installed in the house revealed Brengle getting naked along with a man and heading into the bedroom. As Brown alleges the two had sex, Brengle says nothing of that sort happened. Couple Caught Having Sex on Mexico-Bound Flight, Husband & Wife Shares Explicit Footage! Watch Viral Video.

Rosie Brown owner of two pups, Penny and Daisy had gone to Louisiana for her cousin's wedding. To ensure that her pets get food and timely routine walks, she decided to keep Casey Brengle as her pet sitter and paid a price of $315. Before leaving, she even showed Brengle the doggie cam that was installed in their kitchen. Brown thought she had nothing to worry about since Brengle had a good rating too on the app. But she was in for a shock, when the doggie cam gave her a notification about someone unknown in the house.

Watch Video Footage of Pet Sitter Getting Naked and Cosy With Her Boyfriend:

The footage from the camera revealed Brengle kissing her boyfriend in the living and then heading to the master bedroom and also the guest room. At one point, the couple locked out the dogs of the master bedroom. Talking about it, Brown told KABC, "On the preview on the alert, it showed a man in our house, someone that I wasn't expecting. So I opened it up and that's when I saw [Brengle] was there with a man in our house and they were going straight for our bedroom." ‘Ghostly’ Black Cat Vanishes Into Thin Air at Night; Surveillance Camera Captures Spooky Incident (Watch Video).

That's not all, the experience has been ruined for Brown so bad that she cannot even think about sitting on her couch, getting visuals of Brengle lying there naked. She had saved up to get it but she cannot sit on it the same way as before. Brengle is now suspended from the app Wag! The company said that they always do background checks on their dog walkers but such kind of behaviour is unacceptable. When asked about it she said that she lay naked because she was feeling hot! And when questioned about having sex she said, "It's okay that she believes that, that's not what was going on." She also said she was guilty of what she had done but it wasn't intentional! But we are sure Brown would not want her pets in the company of pet sitters again.