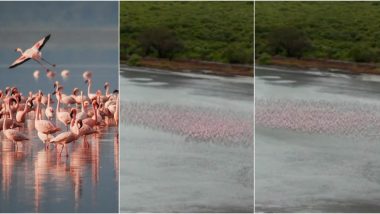 As people sat indoors due to lockdown, thousands of flamingos flew and settled in Navi Mumbai in late April. The birds sitting together spread a pink carpet over the surface of the water in the city, grabbing both national and international headlines. And now the birds are once again in the news for something unique they did. They formed a pattern to alarm Mumbaikars of the cyclone Nisagra prior to which it made landfall. A video which is shared on Facebook shows the flock of flamingos spreading themselves across the lake, but as soon the wind sweeps past, they come together. As it went viral, netizens said that humans have a lot to learn from animals and birds. Flamingos Flock to Mumbai During Lockdown, Watch Videos of Thousands of Beautiful Birds Turning the City Pink!

The video was shared on Twitter with the caption, "Flamingos of Talawe, Navi Mumbai signalling us about the incoming #CycloneNisarga. And when the cyclonic winds come, they quickly unite and get into formations which help them withstand the winds. We humans do have much to learn from them!" You can watch the video here.

The flamingos had arrived from the Rann of Kutch in Gujarat and Sambhar Lake in Rajasthan. Some are said to have flown in from Pakistan, Afghanistan, Iran and Israel. After their sightings, video and pictures of the flamingos had gone viral on social media platforms. As it was shared widely, people claimed that animals and birds have started reclaiming the Earth. Celebrities like Raveena Tandon, Dia Mirza and Twinkle Khanna took to Twitter sharing videos of the flamingos. Deep Pink Water Spotted in Middle of Navi Mumbai's Talawe Wetland, Likely Cause of Rare Algal Bloom (View Pic)

According to the Bombay Natural History Society, since last year, there has been a 25 per cent increase in flamingo migration, when 1.2 lakh birds had come visiting. This year, over 1.5 lakh birds were spotted just in the first week of April.

(The above story first appeared on LatestLY on Jun 03, 2020 08:07 PM IST. For more news and updates on politics, world, sports, entertainment and lifestyle, log on to our website latestly.com).