#PoochnaZarooriHai, Nakuul Mehta, Pankaj Tripathi, Pratik Gandhi & Other Actors Come Together to Highlight the Importance of Consent! Viral Video Emphasizes on ‘No Means NO’

To highlight the importance of consent, Indian actors have come together. With the tagline of #PoochnaZarooriHai, actors Nakuul Mehta, Pankaj Tripathi, Karan Tacker, Pratik Gandhi, Vijay Verma, and Pavail Gulati, emphasises on ‘No means, NO’ in the video. 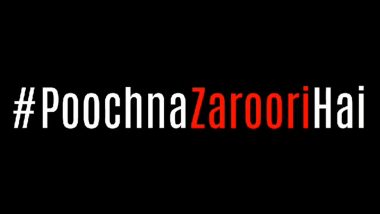 Not all rapists are strangers. Not all criminals lurk down dark alleyways, wielding knives. Some female sexual assault victims know their attackers, and in some of those cases, the attackers are their own husbands. Consent is a very important topic that unfortunately goes unnoticed, more so for married couples. The constitutionality of the marital rape exception in the Indian Penal Code is a substantial question that is yet to be answered. To highlight the importance of consent, Indian actors have come together. With the tagline of #PoochnaZarooriHai, actors Nakuul Mehta, Pankaj Tripathi, Karan Tacker, Pratik Gandhi, Vijay Verma, and Pavail Gulati, emphasises on ‘No means NO’ in the video.

The video features the actors captured in black and white frames, as they talk about some of the most commonly heard lines by men in our country and then bust them. Consent is needed. Without consent, it is sexual abuse. It is unfortunate to know that even today, countless women in our country still endure non-consensual sex with their husbands. Although the campaign is a part of promoting Disney+ Hotstar show, Criminal Justice: Behind Closed Doors, the male stars address to all those individuals who do not believe in consent, be it before or after marriage.

The video has garnered a lot of positive reactions. Non-consensual sex within a marriage is rape. Almost every society greets the problem of domestic violence with a deafening silence, which manufactures myths and encourages attitudes of self-blame, shame and resignation in women who face violence. Men have no right to use violence, and women should not adjust and endure pain under any circumstances. Through the campaign #ConsentZarooriHai, the actors stress the importance of consent in a relationship.

The Hotstar Specials show Criminal Justice: Behind Closed Doors stars Kirti Kulhari in the lead where she plays the character of Anu Chandra and the story deals with the horrors of marital sexual abuse. Pankaj Tripathi, who appears in the consent video, plays lawyer Madhav Mishra who will unfold the story of Anu and what led to the death of her husband Bikram, played by Jisshu Sengupta.

(The above story first appeared on LatestLY on Jan 12, 2021 05:25 PM IST. For more news and updates on politics, world, sports, entertainment and lifestyle, log on to our website latestly.com).