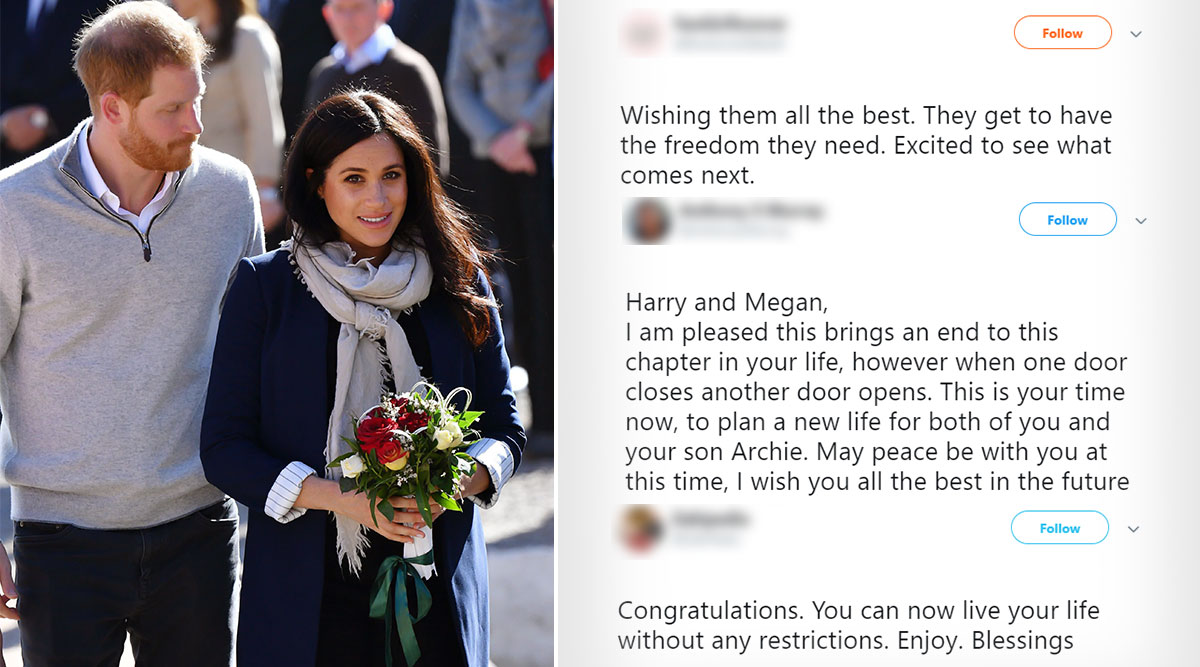 The Duke and Duchess of Sussex, Prince Harry and Meghan Markle officially gave up their royal titles and will begin their new journey in Canada. The official handle of the Duke and Duchess of Sussex, revealed the final communications with the senior royals. Queen Elizabeth offered her support to the couple’s decision to become financially independent. After the official announcement, social media users shared their support and said ‘good luck’ with the independence to Harry and Meghan. The reactions to the official exit of Harry and Meghan from the royal family, flooded the Twitter timeline. Prince Harry and Meghan’s Exit From the Royals Reminds Desi Twitterati of K3G, Hilarious #Megxit Memes and Jokes Will Make You ROFL.

When Harry and Meghan announced that they want to step down from the royal duties and want to become financially independent. On January 18, 2020, Queen Elizabeth II declared that she, along with the Duke and Duchess of Sussex gad found a “constructive and supportive way” to hold up to the couple’s decision. “Harry, Meghan and Archie will always be much loved members of my family. I recognise the challenges they have experienced as a result of intense scrutiny over the last two years and support their wish for a more independent life,” the Queen wrote in her official statement. Prince Harry Gets a Part-Time Job Offer From Burger King.

The Duke and Duchess: pic.twitter.com/obTPdhwTrP

While a section of social media was unhappy with Harry and Meghan’s decision, the majority of the royal fans were happy and showered their support to the Duke and Duchess of Sussex. Royals fans applauded the couple for their outcome.

Congratulations. You can now live your life without any restrictions. Enjoy. Blessings

I am pleased this brings an end to this chapter in your life, however when one door closes another door opens. This is your time now, to plan a new life for both of you and your son Archie. May peace be with you at this time, I wish you all the best in the future

All the Best to Harry and Meghan!

Wishing them all the best. They get to have the freedom they need. Excited to see what comes next.

Let's Live it to Them!

Glad to see some decision has been made, a step forward to the future. So will the social media accounts be changing? I presume the nature of the communications will be changing as well as content?

How are they going to support themselves? pic.twitter.com/ngU3SLlbzN

Praises for the Queen:

The queen has put it perfectly! At the end of the day with titles aside this is a woman that’s wanting to protect her grandsons and his family!

Harry and Meghan will no longer use the HRH title or receive any public funds for their royal duties. The couple will also have to repay the 2.4 million euros of taxpayer money they used to refurbish their Frogmore Cottage, which will remain in their UK home. Harry and Meghan will still be called the Duke and Duchess of Sussex.