Pune Police Chases Car in Suspicion of Theft, Only to Find Real Owner Behind Wheels, Blames it on CCTVs

The police explained the cause of the confusion saying that the CCTVs process information on basis of information fed to it through control room and the confusion took place because the status of case was not updated. 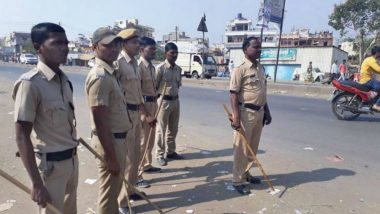 Pune, February 24: In a car chase gone all wrong in Pune, the city police chased and ultimately caught the real owner of the vehicle for stealing his own car. A businessman, who started his journey from Kothrud, was bamboozled to see a Police team and vehicle chasing him while he was driving. Aero India Show 2019: Fire Breaks Out in Parking Lot of Bengaluru's Yelahanka Air Force Station, Over 300 Vehicles Gutted.

Noticing and scared that the police was chasing him, the man accelerated speed, which raised the further suspicion of the police.

The Police van soon intercepted the vehicle. They asked the man to come out of the car. When that happened, the police told the man who claimed that he was the owner of the car, to produce papers and prove his point.

But to the cops surpris, the man produced all the documents and it was established beyond proof that he was the owner of the car.

The police then asked the man why did he register a complaint saying he had lost his SUV when he was in its possession clearly. The owner of the car informed police that his vehicle was stolen five months back and that he had found it a month ago after completing all legal procedures.

The police soon left but not before the incident became a talk of the town regarding how a man was chased by the police for driving his own vehicle legally. However, the police explained the cause of the confusion saying that the CCTVs process information on basis of information fed to it through control board and the confusion took place because the status of case was not updated. A senior police official said such mistakes will not occur again.

(The above story first appeared on LatestLY on Feb 24, 2019 12:10 PM IST. For more news and updates on politics, world, sports, entertainment and lifestyle, log on to our website latestly.com).