The viral pic seemed to have highlighted his abdominal muscles, ‘abs.’ Soon, ‘Rahul Gandhi Has Abs’ began to trend on Twitter with the Congress MP's viral pic from his visit to Kerala, which has left netizens in ‘Fit India’ spirit. 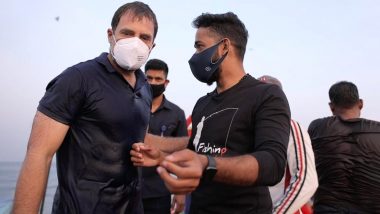 Congress MP, Rahul Gandhi’s latest visit to poll-bound Kerala has grabbed some eyeballs. He dived into the sea with local fisherman to better understand their problems. Photos and videos from his visit have surfaced on the internet. But more than anything, it was that one pic which showed the Congress leader in a wet T-shirt, the main talk of the event. The photo seemed to have highlighted his abdominal muscles, ‘abs.’ Soon, ‘Rahul Gandhi Has Abs’ began to trend on Twitter with the Congress MP's viral pic, which has left netizens in ‘Fit India’ spirit. Funny memes and hilarious reactions flooded the Twitter timeline, including some praise-worthy posts.

Rahul’s adventure at sea off the Thangassery harbour in the Kollam district of Kerala, has won the internet. He was captured jumping into the sea with a fisherman, as he claimed to understand their problems better. It was a Kerala-based vlogger, Sebin Cyriac, who the video for his YouTube channel, Fishing Freaks. His recent political trips have been showing a different sight of Rahul, and netizens seem to like it. Last month, he appeared on Village Cooking Channel enjoying delicious mushroom biryani and also helping the Tamil Chefs in cooking process.

The Congress leader’s recent trip too garnered likes on the internet. The 50-year-old MP swam for about ten minutes before returning to the shore. More image and videos showed Rahul helping the fishermen spread nets.

Watch Video of Rahul Gandhi Swimming With Fishermen in Kerala

But it was his wet look, revealing the chiselled abs that left internet users in awe. Politician Rajeev Shukla shared the image on Twitter with the caption, “@RahulGandhi has got abs also? Watch this photo closely. This is after he was swimming in sea.” Users were quick to react! Some had hilarious reactions to give; others praised the 50-year-old being so fit.

⁦@RahulGandhi⁩ has got abs also? Watch this photo closely. This is after he was swimming in sea pic.twitter.com/hlnXu7xMVV

Today's takeaway from Twitter is that Rahul Gandhi has abs. That too very definitive. So exquisitely shaped that they're visible through a thick, wet T-shirt. pic.twitter.com/ZxMS3hQ0LR

He exercised and worked on his abs

Some People Are Confused!

Vin Diesel Aka Yogi Adityanath Has Better abs? This Twitter User Thinks So!

The Wayand MP, has been touring the state for the last two days and had reportedly ventured into the sea, with around 23 fishermen. He spent over two and a half hours at sea, interacting with the fishermen and listening to their problems.

(The above story first appeared on LatestLY on Feb 27, 2021 03:25 PM IST. For more news and updates on politics, world, sports, entertainment and lifestyle, log on to our website latestly.com).