Tamil cooking show, ‘Village Cooking Channel' had a politician as their guest-- Rahul Gandhi. The Congress MP even helped the chefs in mixing the ingredients for raita. The video has gone viral on social media. 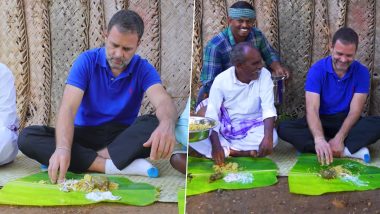 A different sight from the Tamil Nadu election campaigns came forward to the citizens. Congress MP Rahul Gandhi who was in the state last week for election campaigning appeared in the famous Tamil cooking show, ‘Village Cooking Channel.’ He joined the chefs and relished in delicious mushroom biryani. Not only that, the politician even helped the locals in the cooking process. The video has gone viral on social media as netizens give it a thumbs up. At the time of writing this, the clip received above 2.6 million views, making it one of the current top trending videos on YouTube.

Village Cooking Channel is extremely famous for treating its viewers to some local dishes and spectacular rural lifestyle. Their energetic opening piece where the group says “Ellarum Vaango,” in local dialect is an iconic catchphrase. The Congress MP who was in Tamil Nadu appeared on the cooking show. He was accompanied by Karur Member of Parliament and Congress leader Jothimani. Rahul even helped the chefs in mixing the ingredients for raita, and shouts the Tamil names for the viewers, much like the channel’s chefs—Vengayam (onion), Thayiru (curd) and Kal uppu (crystal salt). Grandpa Kitchen, Indian YouTube Star Narayana Reddy Dies at 73, His Dedication Towards Orphans Remains Unmatched.

While sitting on the mat, the politician engages in conversation with the channel’s team. They talk about their work and how the locals aspire to go abroad to cook traditional food. Hot mushroom biryani is then served to him on a banana leaf. He tastes and says, “nalla iruku” (it’s good). Everyone on the video enjoys the food together, before Rahul bid them farewell. Chef Mastanamma, the 107-Year-Old YouTube Star, Passes Away; Watch Video of Her Final Journey.

Rahul Gandhi was reportedly on tour in Tamil Nadu to campaign for the upcoming Assembly polls in the state. The Tamil cooking show is extremely famous. They have broken the barriers of language and are loved by people of all states.

(The above story first appeared on LatestLY on Jan 30, 2021 01:52 PM IST. For more news and updates on politics, world, sports, entertainment and lifestyle, log on to our website latestly.com).