Rajiv Tyagi Dies: Twitterati in Disbelief With Congress Spokesperson’s Untimely Demise As He Participated in a Television Debate at 5 PM 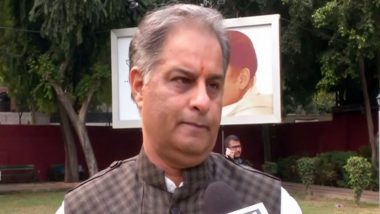 New Delhi, August 12: Indian National Congress leader and spokesperson Rajiv Tyagi on Wednesday died after suffering a heart attack at his residence in Ghaziabad. He was immediately taken to Yashoda Hospital, where doctors tried to revive him, but failed, reports suggest. Congress party informed about the death of its leader on the Twitter handle. Rajiv Tyagi, Congress Leader, Dies Due to Cardiac Arrest.

The tweet read, "We are deeply saddened by the sudden demise of Shri Rajiv Tyagi. A staunch Congressman & a true patriot. Our thoughts and prayers are with his families & friends in this time of grief."

We are deeply saddened by the sudden demise of Shri Rajiv Tyagi. A staunch Congressman & a true patriot. Our thoughts and prayers are with his families & friends in this time of grief. pic.twitter.com/yHKSlzPwbX

The untimely death of Congress spokesperson has shocked many netizens as well as politicians. Tyagi had last appeared in a debate at 5 pm today on Aaj Tak. He had also tweeted about the same.

Rajiv Tyagi Appearing for Congress on a Debate.

This is shocking! Rajiv Tyagi was part of a debate with @sardanarohit sometime back. #RIP pic.twitter.com/KNh4od6Gkm

Bharatiya Janata Party leader Sambit Patra expressed shock at Congress leader's demise and said had participated in a debate with him minutes earlier. “Can’t believe that my friend and Congress spokesperson @RT For India is no longer with us. We had debated together on Aaj Tak on the 5pm show earlier today. Life is very unpredictable. I can’t find words still,” Patra said.

Rajasthan Chief Minister Ashok Gehlot also said that he is saddened by the demise of Tyagi. "Saddened to know of untimely demise of INC national spokesperson, Sh. Rajiv Tyagi. He served the party dedicatedly. My heartfelt condolences to his family members & friends. May they remain strong in this difficult time. May his soul rest in peace," he tweeted.

(The above story first appeared on LatestLY on Aug 12, 2020 09:10 PM IST. For more news and updates on politics, world, sports, entertainment and lifestyle, log on to our website latestly.com).