Pictures of the dog went viral after its owner Sandra Pineda from Quezon City in the Phillippines shared a photo of Piper on Instagram. 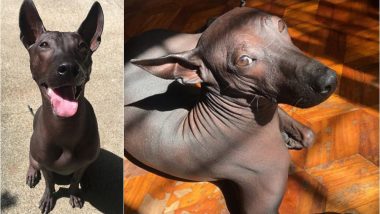 Photos of a rare dog have gone viral on social media for its appearance. When Sandra Pineda shared pictures of her dog online, internet users thought it was the statue of a dog. But people soon realised it was a real dog and not a statue. It is a sentient hound, a rare breed and looks very different from regular dogs.

Pictures of the dog went viral after its owner Sandra Pineda from Quezon City in the Phillippines shared a photo of Piper on Instagram. The photo quickly went viral collecting over ten thousand likes in one hour. Soon, people started inquiring if it was a real animal or not. Most comments read: 'Is that a dog or a statue?!?!' Piper is a Mexican Hairless Dog which is also known as a Xoloitzcuintli. Last year, Sandra bought Piper when she was only two months old. This Video of a Pet Dog and Cat Loving Each Other is Going Viral, Watch Cute Clip.

Here are pictures of Piper that has stunned the internet:

LadBible quoted Pineda as saying, "It was so funny to see all these compliments coming through of people thinking Piper was a statue. They were all really confused and asking me whether she was real or not."

He added saying, "At first, I thought it was a joke, but then I realised they were serious. They just couldn't believe that she was a real dog.

"I guess I'm so used to her I don't see it as much as other people, but my friends and family told me they can definitely see it. It's actually really flatter ring to think that my beautiful dog could be mistaken for a work of art."

Piper's shining skin is due to the regular polish she gives her virgin coconut oil. Sandra also said, "I really like the fact that she's hairless, it's really easy to deal with. We use mild dog shampoo on her, and after baths, she gets lathered up in virgin coconut oil to keep her skin moisturised and shiny." According to National Geographic, Xoloitzcuintlis have been around for 3,500 years and played an important role in Aztec and Maya life.

(The above story first appeared on LatestLY on Jan 13, 2019 04:50 PM IST. For more news and updates on politics, world, sports, entertainment and lifestyle, log on to our website latestly.com).