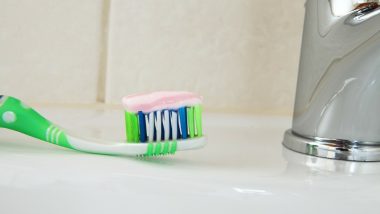 Itanagar, September 23: A man in Arunachal Pradesh ended up accidentally swallowing the toothbrush while brushing his teeth. The shocking incident was reported in Pasighat town of the Northeastern state. The 39-year-old person who accidentally swallowed the brush survived after a critical operation performed by the doctors. Guwahati Man Approaches Hospital After Abdominal Pain, Doctors Find Mobile Charger in His Urinary Bladder.

The patient, a resident of Roing Lower Dibang Valley, reportedly told doctors that he ended up swallowing the brush while cleaning his teeth cavities. He was rushed to a local nursing home by his family members.

Upon learning about his case, the nursing home referred him to the Bakin Pertin Memorial Hospital in Pasighat for surgery. Initially, the x-ray had failed to detect the brush in his oesophagus. This prompted the doctors to recommend laparotomy test, a local media report said.

Subsequently, the toothbrush was detected inside the stomach. The team of medics asked the family of patient to arrange for the operation at earliest as his condition may have deteriorated upon further delay.

In the operation that lasted for 30-35 minutes, the doctors succeeded in successfully removing the toothbrush. Interestingly, the patient claimed that even before the operation, he only felt a minor discomfort despite the brush being present in his stomach.

(The above story first appeared on LatestLY on Sep 23, 2020 10:24 PM IST. For more news and updates on politics, world, sports, entertainment and lifestyle, log on to our website latestly.com).