Brihadeeswarar Temple is one of India's most exquisite architectural splendours, erected amidst giant walls made with intricate details by the emperor of the Chola dynasty, Rajaraja I, between 1003 and 1010 CE. Known as one of the largest Hindu temples, it has a captivating heritage and past that is revealed below. 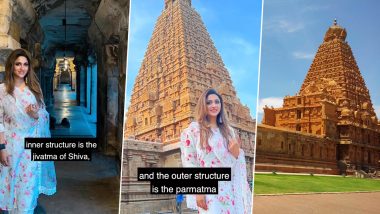 Indian culture is directly connected with rich temples that are considered an integral part of society. Numerous shrines are devoted to the divine Hindu Gods and Goddesses, gracing distinct corners of the country with their captivating architectural designs and histories. One such enthralling holy shrine known for its rich past and mesmerising craftsmanship is Tamil Nadu’s Brihadisvara Temple in Thanjavur. The Hindu Dravidian style temple is locally known as Periya Kovil and also called Peruvudaiyar Kovil.

Recently, a video describing the ancient beauty and mysteries of the temple went viral on social media platforms. The clip featured the founder of Soka Design Studio, Sravanya Pittie, who explained the supreme brilliance of the temple’s architecture thoroughly. It has been widely shared by many including eminent industrialist Anand Mahindra. Brihadisvara Temple Viral Video by Sravanya Pittie, Founder of Soka Design Studio, Displays the Shrine’s Famed Size, Great History and Archaeological Beauty.

Here’s The Viral Video Of Brihadisvara Temple by Sravanya Pittie

An informative & inspiring clip by the talented Designer Sravanya Rao Pittie. I think we haven’t really absorbed how accomplished, powerful & technologically advanced the Chola Empire was. Nor have we adequately conveyed its historical significance to the rest of the world. pic.twitter.com/bRMg0aViU8

According to historical texts, Brihadeeswarar Temple was built during the Chola empire by Rajaraja I between 1003 and 1010 CE. Interestingly, for the non-historian movie buffs out there, this temple has an interesting connection to this September 30’s major release, Ponniyin Selvan I.

In case you missed it, Mani Ratnam's magnum opus is based on the Chola empire, with Tamil star Jayam Ravi playing the role of Arulmozhi Varman, who is better known as Rajaraja I. Chiyaan Vikram plays his elder brother in the movie, Aditha Karikalan, who is shown as the Crown Prince in the movie. The upcoming Indian Tamil epic also stars Aishwarya Rai Bachchan, Karthi, Trisha, Aishwarya Lekshmi, Sobhita Dhulipala, Prabhu, R. Sarathkumar, Vikram Prabhu, Jayaram, Prakash Raj, Rahman, R Parthiban and Lal. The historical drama will give you a glimpse of the Chola-era temple and focuses on the early days of Rajaraja I as represented in the above reel.

Thanjavur’s Brihadisvara Temple is dedicated to Lord Shiva, which attracts devotees and pilgrims worldwide. The ostentatious architectural wonder is a perfect illustration of the giant heights achieved in the profession of architecture by the Chola rulers.

(The above story first appeared on LatestLY on Sep 28, 2022 06:27 PM IST. For more news and updates on politics, world, sports, entertainment and lifestyle, log on to our website latestly.com).