Surat Saree Makers Make Army-Themed Sarees After Pulwama and Balakot Strikes But Use Images of US Army! Check Funny Tweets

With the elections nearby, this could well be called election fashion? 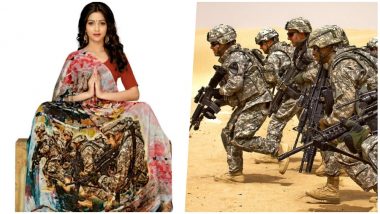 The 2019 elections are nearing and sarees with political figures on them have already started hitting the markets. But in light of the recent events, a lot of people are filled with patriotic fervour and pride about the army. So one of the saree-making centres in Surat decided to make sarees with army prints on it. The Pulwama attack, followed by India's retaliation with Balakot air strike and the return of IAF Wing Commander Abhinandan Varthaman from Pakistan, the series of events have led to people feeling all patriotic and proud about the nation. So it was assumed that sarees with army prints on it would get a good demand. But it was later realised, the saree prints have used the US Army image and not the Indian army. It has indeed become a faux pas when a Twitter user pointed it out. After 'Modi Saree', Rahul & Priyanka Gandhi-Printed Sarees Flood Gujarat and Mumbai Markets Ahead of 2019 Lok Sabha Elections.

The saree makers found a new method to display their outrage, so they made saree with army prints on them, one of them even including a surgical strike! It was reported that 10,000 pieces of this designer Army-themed saris will be different parts of the country like Delhi, Madhya Pradesh, Bihar, Uttar Pradesh, Tamil Nadu and Karnataka. But a Twitter user pointed out the big mistake in them and people could not help but laugh at it. Pakistan's Flag on Toilet Tiles! Vendor in Gujarat is Making 'Pakistan Murdabad' Tiles, Watch Video.

Here is one more... pic.twitter.com/AxvKWGcWn4

People on Twitter were quick to respond in their usual funny manner. Check how some of them reacted to this fashion blooper.

😂😂Thank God they didn't use pictures of Pakistani Soldiers

they used the first image popped up in Google image search for 'Army' :D

While there were few laughs, one of the users put up a video of a saree which was made on surgical strike print and also had a face of PM Narendra Modi.

With the elections nearby, this could well be called election fashion? We wonder, how many women out there would be willing to have army printed sarees to show their patriotism. We hope the makers correct the faux pas in their next set of Army-themed sarees.

(The above story first appeared on LatestLY on Mar 03, 2019 01:26 PM IST. For more news and updates on politics, world, sports, entertainment and lifestyle, log on to our website latestly.com).