Survival of the Fittest or Not? Viral Video of Man Rescuing Deer From Hold of Python Initiates Debates on Law of Nature 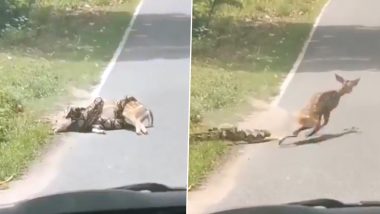 Survival of the fittest is the law of nature. But what will be your reaction when you see a strange animal attacking the weaker one? As humans, our first instinct would be to save it. But by doing that wouldn't you be distributing the cycle of nature? Video of a python strangulating a baby deer has gone viral on social media platforms. In the clip, a man can be seen trying to help the deer from the clutches of the snake with the branch of a tree. He repeatedly does that and eventually, the python loses is the grip. The deer jumps out of the snake's hold and skips away and the reptile also crawls away into the nearby bushes. As the video went viral, people thanked the man for his kind gesture but not everyone is of the same opinion. Video of Buffalo's Mighty Leap Over a Pride of Lions to Escape an Attack Is Going Viral on Twitter!

The video was shared on Twitter with a question, "What do you think? The man was right or wrong?" While most of them believed that the man was only relying on his instincts to help the poor animal, others said that the law of nature does not allow human intervention. Varying opinions were shared online which also kickstarted debates on the topic. Duck Fools a Dog by Playing Dead! Other Times When Animals Faked Death to Escape From Tough Situations (Watch Viral Videos)

When you have a choice between kindness & right, always be kind.

What Should be Done in This Scenario?

So, even if the python was eating a man or a human child are we supposed to leave them alone?? Even we are are food for the python! When one gets to see such a visual, the first instinct is to save someone's life otherwise a person like me would get never-ending sleepless nights!

They better be left alone.

Absolutely wrong .. The python has every right over it's prey that it has earned. Bloody idiot whoever did it.

Never interfere with the balance of nature

Very wrong, we should NOT interfere with the ways nature or wold. It should take it's own course. This is not kindness, this is detrimental to both the animals and interferes with their behaviour.

What is right or wrong is subjective in this matter to be frank. One can also argue that it's cruelty to python. A hungry python may infact enter human lands and cause more harm.

Python may lose its life, by losing its prey. Python is not Vegetarian like deer. It has to hunt for food & survival. No predator will be alive if we keep on saving their prey.

He was kind to that deer but not to that python!! Unlike us humans wild animals only hunts when they are hungry!!

😂😂😂 the python does not have a choice to be vegetarian like you, Sir. Understand the python's point of view.

Does Man Have Right to Interfere in Nature's Law:

There is no right or wrong here.

Many times we've seen a hippo charging into a croc and the croc losing its prey and been appreciative of the hippo's action.

The strong prevail under the laws of the Jungle. That human was the most powerful here.

If Not This Deer, Then Another Tomorrow?

That man was pointless. That snake is a carnivores and will remain one for its entire life.

1.This is not human life issue

2.The chronic effects hv a bigger impact in nature than immediate consequence

3.Humans shuldn't interfere in the wild. No amount of ethical evangelism can nullify this.

4. If u do this, then why not save a cockroach frm the grasp of a lizard?

While the video has initiated various conversations on Twitter, we are not sure what made the man do the act. The video has been captured from a vehicle when it was happening in the middle of the road. Probably, the man simply wanted to pass through the road and rescued the deer. Whatever be his thought process, Twitter is flooded with varying opinions on the law of nature.

(The above story first appeared on LatestLY on Jun 02, 2020 08:30 PM IST. For more news and updates on politics, world, sports, entertainment and lifestyle, log on to our website latestly.com).

Comments
Tags:
Deer Law of Nature Nature Python Survival of the Fittest viral video
Comments
You might also like