Brown was planning to have a breast lift and implants and some abdominal lipo. The doctor examined her breasts earlier this week and unfortunately discovered a lump in each of Tessica’s breasts. 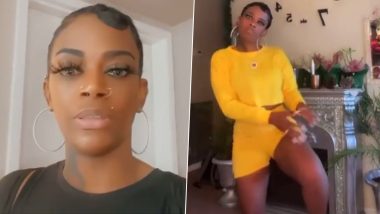 Tessica Brown, who shot to fame during a bizarre hairstyle fail, found herself in yet another trouble. This time, it is more serious than the previous one. The internet sensation, famously known as “Gorilla Glue Girl,” has found lumps in her breasts, just weeks after an operation to remove the adhesive from her hair. She was made aware of the same after a doctor was doing a pre-surgery prep for breast implants. According to reports, Brown was planning to have a breast lift and implants and some abdominal lipo. The doctor examined her breasts earlier this week and unfortunately discovered a lump in each of Tessica’s breasts.

Brown raised to popularity with a bizarre viral TikTok post. She had applied gorilla glue on her hair before a date and found out later that it cannot be removed. She had to undergo surgery to get rid of her extra slick ponytail. The viral video led the 40-year-old Louisiana mother of five getting a celebrity management team, a merchandise line and even a sketch on Saturday Night Live.

While her life was just going fine, and she was planning for a makeover, things took a serious turn. Her manager, Gina Rodriguez, reported to TMZ that Brown’s doctor Dr Michael Obeng, who helped her get the Gorilla glue out of her hair, discovered the lumps while doing a pre-surgery prep for implants. Brown had a mammogram, which confirmed the presence of masses. She has already surgery to remove them, and they are now being tested for cancer. Purple Shampoo Challenge Goes Viral on TikTok, Watch Videos of Girls Emptying Shampoo Bottles on Their Hair For Latest Beauty Trend.

The report also notes that Brown believes that Gorilla Glue's incident led her to this important discovery and is grateful to Obeng for detecting the masses early. Further, the more than $20,000 that was raised in a GoFundMe for Brown has been reportedly donated to Obeng’s Restore Foundation to provide reconstructive surgery services for people in need.

(The above story first appeared on LatestLY on Feb 28, 2021 05:56 PM IST. For more news and updates on politics, world, sports, entertainment and lifestyle, log on to our website latestly.com).