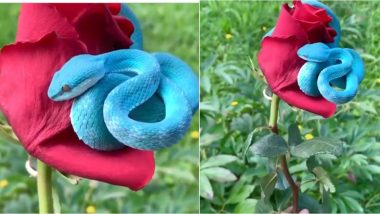 Video of a bright blue snake coiled on a red rose had recently gone viral. The stunning colour combination is rare but dangerous too. The viper is venomous and can cause severe bleeding, internally and externally. However, the video looks simply stunning. Vipers are a large family of snakes and the scientific name is Viperidae. All vipers are venomous and come with hinged fangs. They are typically found in colder, especially in northern climates. You will see them over the world other than Antarctica, Australia, New Zealand, Madagascar, north of the Arctic Circle and island clusters such as Hawaii. The recent video was shared on Twitter with the caption, "The incredibly beautiful Blue Pit Viper." Mumbai Snake Rescue: Rare Two-Headed Russell Viper Rescued From Kalyan Area, Watch Video.

According to the Moscow Zoo, the snakes are the blue variety of the white-lipped island pit viper, also known as Crotalinae. It is a pit viper subspecies found in Indonesia and East Timor. Most white-lipped pit vipers are actually green and the blue variety being is quite rare.  The subfamily Crotalinae is found in eastern Europe eastward through Asia to Japan, China, Indonesia, peninsular India, Nepal, and Sri Lanka. In the Americas, they range from southern Canada southward to Central America to southern South America. Salazar Slytherin Discovered in Arunachal Pradesh! New Pit Viper Snake Named After Harry Potter Character.

The blue variety is rare, and only found in places such as Komodo Island, where both green and blue individuals have been spotted. Also, some species of python in far north Queensland turns blue when it’s pregnant. The recent video of the blue snake around the flower has gone viral with people exclaiming at how exotic it looks.

(The above story first appeared on LatestLY on Sep 19, 2020 08:36 PM IST. For more news and updates on politics, world, sports, entertainment and lifestyle, log on to our website latestly.com).