In India, netizens were thrilled with Carry Minati’s ‘YouTube vs TikTok: The End’ roast video. Although the video has been taken down, it created quite a stir online. Again, there was the ‘Autism Challenge’ on TikTok, which was insensitive mocking people with special abilities. We bring you the top seven viral videos of this week that gave netizens bittersweet moments. 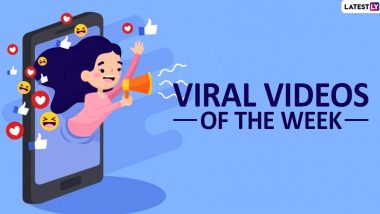 The lockdown period is only increasing. We don’t know when things will be back to normal. All of us are in a desperate wait to visit the outside world. It seems like, we have almost forgotten what shops and parks looked like, once. Yes, it will take some time for the virus to go away, even more than we are hoping at the moment, but this will go. Meanwhile, we keep ourselves entertained, engaging in so many skills that we never knew existed within us and of course, content creation on social media. It is because of the existence of Facebook, Twitter, Instagram, TikTok, Reddit, Snapchat, and so many other platforms, that is keeping us engaged with so many viral moments. Each hour, there is something new—a video, a meme, a tweet or any other post and hashtags that just keep all of us hooked, for longer hours. In India, netizens were thrilled with Carry Minati’s ‘YouTube vs TikTok: The End’ roast video. Although the video has been taken down, it created quite a stir online. Again, there was the ‘Autism Challenge’ on TikTok, which was insensitive mocking people with special abilities. Like every Saturday, we bring you the top seven viral videos of this week that gave netizens bittersweet moments.

Almost everyone in India is talking about Ajey Nagar, aka Carry Minati’s ‘YouTube vs TikTok: The End’ roast video, aiming significantly at self-proclaimed TikTok influencer Amir Siddique. The video received millions of views, broke all the record and was too close to breaking YouTube’s most-liked non-music video, globally. But before that could happen, YouTube took down the video over its harassment and cyberbullying policy.

The video of Leopard being circulated as from in Sion, JVLR, & other different areas of Mumbai. Is not a true news.

It is from Hyderabad spotted yesterday.

In yet another story of animals reclaiming nature, video of a leopard, resting on the street was circulated on social media. At first, it was associated with many claims stating that the animal was spotted in Mumbai. But officials later confirmed that the video was actually from Hyderabad and the animal soon ran away in the nearby woods.

This 91-year-old woman in self-isolation knitted a hospital in a bid to raise funds to help the NHS workers in England. Named as ‘Knittingale Hospital,’ the creation paid tribute to the Nightingale Hospital created to treat the COVID-19 patients in London.

France eased lockdown last week, and other non-essential services were also opened. People returned to their offices, and spent some time with friends and family in parks and streets. Drone footage captured how life has returned to Paris, the capital city, the streets of which are always busy.

Here’s a time lapse of me awkwardly doing my self-test in my booth: I made a “kruuuar” sound as instructed to hock up my deep-throat saliva & spit it into a tube (w/ the help of a paper funnel) and double-bagged it. Several ppl made sure the tube was upright when I handed it in. pic.twitter.com/XzPNlTkQdN

A passenger travelling from France to Hong Kong documented how flying in the era of coronavirus actually looks like. In a series of tweets, she captured all the moments from starting her journey to France to reaching her destination, including the procedures passengers have to undergo before they could go home. She also took a time-lapse video of herself, self-testing at the airport that has gone viral.

Like France, New Zealand too eased its lockdown. Residents were happy to indulge in their favourite activities, like grabbing a cup of coffee, watching a sunset and also meeting with the family. Many videos have surfaced on social media showing how the country celebrated the ease of restrictions.

In TikTok’s autism challenge, people were seen making videos of themselves, acting like they have autism. It definitely did not make any sense and was heavily criticised on social media for mocking people with special abilities.

These are the seven videos that went viral on social media, giving netizens the dose of both anger and laughter. As we continue being in the lockdown in the bid to flatten the curve, we eagerly wait for the upcoming week to unfurl the viral moments. Until then, happy weekend, everyone!

(The above story first appeared on LatestLY on May 16, 2020 03:00 PM IST. For more news and updates on politics, world, sports, entertainment and lifestyle, log on to our website latestly.com).