A picture and video of a leopard sitting along the divider on the main road have been shared online. However, it is a fake claim. Even actress Raveena Tandon has shared it on Twitter although she asked if it was genuine. The video and pictures are from Hyderabad taken on May 14. 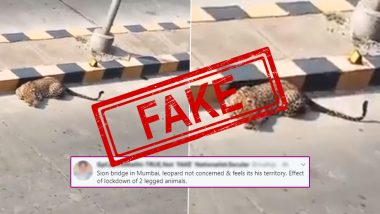 Amid the Coronavirus lockdown, we have read numerous reports, seen pictures and videos of animals being spotted outside. But taking advantage of such instances are fake news mongers passing on claims to create panic. A message has been shared in WhatsApp and Twitter about leopard being spotted near Mumbai's Sion bridge. Some have said it is JVLR in Andheri. A picture and video of a leopard sitting along the divider on the main road have been shared online. However, it is a fake claim. Even actress Raveena Tandon has shared it on Twitter although she asked if it was genuine. The video and pictures are from Hyderabad taken on May 14. A leopard lost its way and was spotted sitting on the road. But before the officials could come for a rescue, it went away in the woods. The same image and video are being used to spread panic among residents in Mumbai. Fact Check: Ooty Ghat Road Reclaimed by Herd of Deer? Know Truth Behind The Viral Image.

Yesterday, a leopard was spotted in Mailardevpally area of Hyderabad. While authorities were called in, the leopard ran away in the nearby woods. There was already a lot of chaos by the locals, which made it run away. As IFS Parween Kaswan also mentioned, the search for this wild animal is still on. Hopefully, it will find its way back to the jungle. The claims of this video being from Mumbai either in Sion or JVLR are absolutely false. Animals Reclaiming The World in Photos & Videos: From Leopard in Hyderabad to Gaur in Assam, 5 Instances of Wild Animals in India on The Loose.

Check Tweets Claiming the Leopard is From Sion in Mumbai:

Sion bridge in Mumbai, leopard not concerned & feels its his territory. Effect of lockdown of 2 legged animals. pic.twitter.com/guBF7SuXKj

In Sion ,mumbai. - via wassap. @ParveenKaswan can you verify this and what was the outcome ? Any news,anyone has of this leopard? pic.twitter.com/kockpS1F5S

The video of Leopard being circulated as from in Sion, JVLR, & other different areas of Mumbai. Is not a true news.

It is from Hyderabad spotted yesterday.

As we mentioned earlier, the video is from Hyderabad and not from Mumbai. A piece of similar fake news was being spread last month about a leopard being spotted in Thane. The actual clip was from Tirupati. So please be aware of such fake news and claims that are being easily made to believe. Verify the source of these pieces and only then share them with everyone.

It is a fake claim, the video is from Hyderabad.

(The above story first appeared on LatestLY on May 15, 2020 07:38 PM IST. For more news and updates on politics, world, sports, entertainment and lifestyle, log on to our website latestly.com).