Amid all the shocking and disheartening revelations, there was one good news: Harry and Meghan announced they are expecting a baby girl this summer. With this, many fans speculate if the couple would name their unborn second child Diana, after Harry’s late mother, the Princess of Wales. 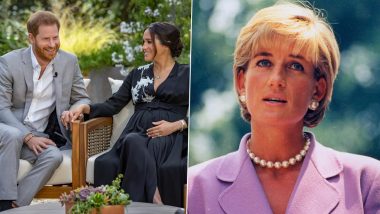 Prince Harry and Meghan Markle’s interview with Oprah Winfrey continues to do rounds. Serious revelations were made in the interview and have the potential to shake the British monarch. People have shown tremendous concern on how the Duke and Duchess of Sussex were treated and their decision to move out of the royals. From dealing with mental health issues, to one of the royal family members’ concerns over their son Archie’s skin colour, to Prince Charles avoiding Prince Harry’s phone calls and more, the two-hour interview episode is pure chills. Meghan’s ordeal was also emotionally compared with what Harry’s mother, the late Princess Diana, went through during her marriage with Prince Charles. Amid all the shocking and disheartening revelations, there was one good news: the couple announced they are expecting a baby girl this summer. With this, many fans speculate if Meghan and Harry would name their unborn second child Diana, after Harry’s late mother, the Princess of Wales.

Twitter is abuzz as they continue to react to the interview, a few short clips were shared from the Oprah interview. Netizens remembered Princess Diana and her sensational interview detailing her crumbling marriage with Prince Charles, back in 1995. Many believed that Meghan on Oprah echoed, Princess Diana’s interview. Internet users lauded the Duke and Duchess of Sussex for courageously speaking in the interview and congratulated the two expecting a second child, after experiencing a heartbreaking miscarriage last year.

Some went on speculating or instead hoping if Prince Harry and Meghan Markle would name their daughter in honour of Prince Harry’s late mother, the Princess of Wales. Social media is filled with tweets on how they might call their daughter Diana. But will they?

I think Harry and Meghan should name their daughter Diana after her grandmother.😊 #OprahHarryMeghan #MeghanMarkle #PrinceHarry

I have a feeling that Prince Harry and Meghan Markle will name their daughter either Diana or Doria - if not first, then definitely middle name

I hope Meghan and Harry name their daughter Diana. It’d be a beautiful acknowledgment. #HarryandMeghanonOprah #MeghanMarkle

Prince Harry and Meghan Markle should name their daughter Diana. That would be so sweet🥲 ♥️

Will the Couple Name Their Daughter Diana?

If Meghan and Harry have a daughter do/will they name her Diana.? I hope! #MeghanMarkle #Harry and Meghan #OprahMeghanHarry #Diana pic.twitter.com/mcicQ7GEMX

As the speculations took over Twitter, many media outlets claimed that it is highly 'unlikely,’ that the couple would name their daughter Diana. Although both Harry and Meghan, have not shared any details on the name during the interview, a close source reported that the couple fears it would make the child a target for attention. It is also unlikely if the pair may use the name Diana as a middle name for the second child, but notable that Prince William and Kate Middleton’s five-year-old daughter Charlotte already possess that middle name. Besides, they will reportedly give the baby the surname of Mountbatten-Windsor, just like their firstborn, Archie.

(The above story first appeared on LatestLY on Mar 09, 2021 03:39 PM IST. For more news and updates on politics, world, sports, entertainment and lifestyle, log on to our website latestly.com).