Meghan Markle-Prince Harry's Interview to Oprah Winfrey: How Late Princess Diana Helped After The Royal Family Cut Them Off Financially

It wasn't just Meghan Markle who was stunning everyone with her revelations during the interview with Oprah Winfrey, Prince Harry was equally explosive. He mentioned how his late mother Princess Diana helped when they were cut off financially by the Royal family. 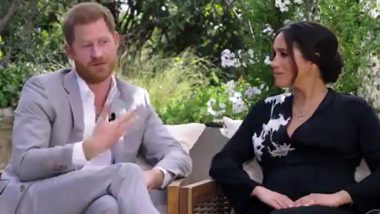 Meghan Markle and Prince Harry's interview with Oprah Winfrey has put social media on high alert. The amount of information the couple is sharing regarding their time with the Royal Family of England and what led to their exit from the monarchy are making people form a lot of opinions. Meghan admitted that the family was concerned about Archi's complexion before he was born and the fact that she had suicidal thoughts. Then came Harry and the truth bombs he shared, are exploding still. Prince Harry revealed that it was his late mother Princess Diana who came to their rescue when they were cut off financially even when she is no more. Meghan Markle-Harry-Oprah Winfrey Interview: The Duchess Of Sussex Reveals Royal Family Had Concerns About ‘How Dark Archi’s Skin Might Be’ (Watch Video)

Harry told Winfrey, "My family literally cut me off financially in the first half of 2020 but I have what my Mum left me and without that, we wouldn’t have been able to do this. It’s like she saw it coming and she’s been with us through this whole process”. The Prince even mentioned how his mom would have reacted if she saw them quitting the family. She would be angry at first but would understand later.

And now the money:

Harry: My family literally cut me off financially in the first quarter of 2020.

I have got what my mum left me. I think my mum saw it coming. And I felt my Mum's presence through this process.#OprahMeghanHarry

What's making everyone's heartbreak was Prince Harry admitting he didn't want history repeating itself and he asserted he was talking about his mother.

(The above story first appeared on LatestLY on Mar 08, 2021 10:22 AM IST. For more news and updates on politics, world, sports, entertainment and lifestyle, log on to our website latestly.com).