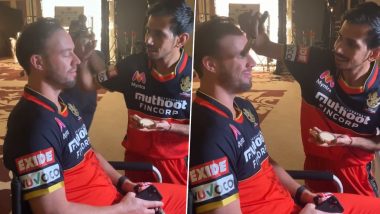 Royal Challengers Bangalore (RCB) will fight for their maiden title in the 13th edition of the Indian Premier League (IPL 2020) which is set to get underway on September 19. AB de Villiers and Yuzvendra Chahal, who have been a vital cog of the side in the previous seasons, will be critical to the team’s success. Recently, however, the RCB duo were seen in a new role. Taking to Instagram, Chahal shared a hilarious video in which he’s doing a touch of the South African maverick with Ben Howard’s famous track ‘Only Love’ playing in the background. AB de Villiers to Turn Wicket-keeper in Upcoming Season.

“Because he wanted me to do his touch up @abdevilliers17 #onlylove,” the leg-spinner captioned the video. In the clip, De Villiers is sitting quietly with his eyes close as Chahal was doing his antics with the make-up brush. Netizens were left in splits after coming across the video as the comment section was flooded in no time. Chahal’s fiancée Dhanshree Verma was also impressed by her better-half’s make-up skills. “What a relief... don’t have to contact makeup artists,” commented Dhanshree. Meanwhile, let’s look at the antics of the RCB duo. RCB Team Profile for IPL 2020: Royal Challengers Bangalore Squad in UAE, Stats & Records and Full List of Players.

Because he wanted me to do his touch up 🤣 @abdevilliers17 #onlylove

RCB will start their IPL 2020 campaign against David Warner’s Sunrisers Hyderabad on September 21 at the Dubai International Stadium. The Virat Kohli-led side will want to get off to a winning start as momentum has played a crucial part in their journey in the previous seasons.

With the likes of Aaron Finch, Chris Morris and Adam Zampa added in the team, RCB looks a much-balanced squad but adapting the new conditions of UAE will be a big challenge.

(The above story first appeared on LatestLY on Sep 17, 2020 10:35 AM IST. For more news and updates on politics, world, sports, entertainment and lifestyle, log on to our website latestly.com).