Babar Azam Should be There in IPL, Nasser Hussain Says Pakistan ODI Captain is a Phenomenal Player 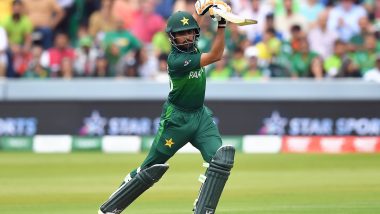 Babar Azam is currently Pakistan’s best batsman, and the limited-overs captain is rated highly around the world as well. The right-handed batsman is part of Pakistan Test side, currently playing against England. Babar impressed one and all with his half-century in the first Test at Manchester and in the second Test in challenging conditions he scored 47. Former England captain and commentator Nasser Hussain believes Babar should be playing in the Indian Premier League (IPL) as he is highly talented. Virat Kohli vs Babar Azam: Pakistan Star’s Brilliant Half-Century vs England Ignites ‘Best Batsman’ Debate, Here’s How Netizens Reacted.

“I don’t want to get into the politics of it, but India and Pakistan not playing each other are like the Premier League with Manchester City not playing Manchester United, or Everton-Liverpool or Spurs and Arsenal”, Nasser Hussain said.

“It’s the Pakistani players not being in the IPL. The IPL will start soon, and Babar Azam won’t be there. He’s a phenomenal player and he should be there,” Hussain added.

Hussain also felt that Babar has it in him to join the likes of Virat Kohli, Steve Smith, Kane Williamson and Joe Root, collectively known as Fab Four. “They keep going on about the ‘Fab Four — it’s the ‘Fab Five’ and Babar Azam is in that,” he had said. Babar Azam Tops the List of Highest Test Averages In Test Matches Since 2018, Surpasses Marnus Labuschange During ENG vs PAK, 2nd Test 2020.

The Indian Premier League 2020 (IPL 2020) is scheduled to get started on September 19. Players from major Test-playing nations will feature in the league barring Pakistan cricketers. Due to the political tensions between the two nations, IPL franchises are barred from picking Pakistan players.

(The above story first appeared on LatestLY on Aug 15, 2020 03:54 PM IST. For more news and updates on politics, world, sports, entertainment and lifestyle, log on to our website latestly.com).