BAN vs AFG, ICC Cricket World Cup 2019: Shakib Al Hasan vs Mohammad Nabi and Other Exciting Mini Battles to Watch Out for at The Rose Bowl in Southampton 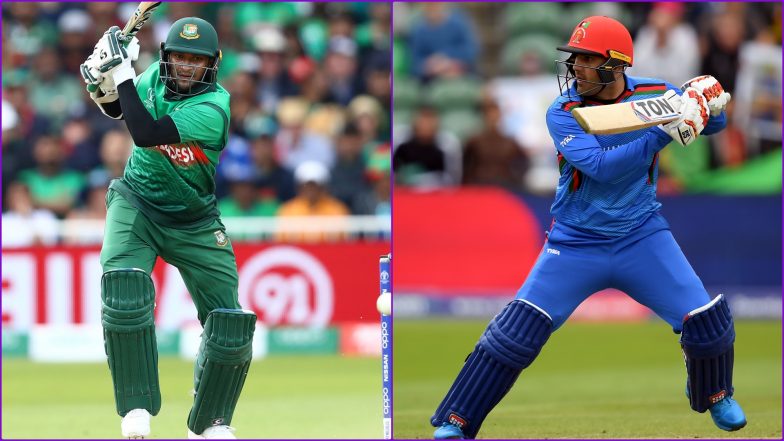 Afghanistan have lost all the matches they have played in 2019 WC so far and is at the bottom of the ICC World Cup 2019 Points Table. Bangladesh have showed spirited performances this World Cup and is still in contention, though tough, for the semi-finals’ spot.

As time ticks away for the battle of Asian powerhouses at World Cup 2019, we at LatestLY bring you some of the mini-battles that will make the match more delighting for the fans. Bangladesh vs Afghanistan ICC Cricket World Cup 2019 Weather Report: Check Out the Rain Forecast and Pitch Report of Hampshire Bowl in Southampton.

Shakib Al Hasan is in the form of his life and would be looking forward to make the most of it against Afghanistan to earn those crucial two points. On the other hand, Mohammad Nabi would be brimming high with confidence after he nearly pulled off a heist against India, a couple of days back.

Both all-rounders are in terrific form and would be eyeing to outdo each other, in what seems to be a virtual quarter-final for Bangladesh. BAN vs AFG Head-to-Head Record: Ahead of ICC CWC 2019 Clash, Here Are Match Results of Last 5 Bangladesh vs Afghanistan Encounters!

Rahmat Shah played an array of shots against the mighty Indian bowling line-up and showed that talent that he has. It will be a challenge for Bangladesh, especially Mustafizur Rahman to stop him atop, and make inroads early in the innings.

The onus will be on Rahmat or Mustafizur to give their respective sides a good start in the innings. Whoever wins the battle between the two will lay the foundation for a bright start in the match.

After taking a beating against England, Rashid Khan made amends in his bowling against India and bowled much better lengths. Rashid will be looking to improve his performance further against Bangladesh’s top order, specifically against Soumya Sarkar.

The Bangladesh’s opener is in fine touch and would relish negating Rashid’s threat of spin bowling upfront. Whoever has the upper-hand will surely be a headache for the Opposition as the game progresses.

The Afghanistan team will be playing for pride and given how they performed against India, they can’t be taken lightly. Bangladesh, to keep their semi-final hopes alive, will have to bring their A+ game into the match and bolster their chances for the knockout by winning the two points. Stay tuned to LatestLY for all the latest updates about ICC World Cup 2019.