Chris Gayle Leads KXIP to a Stunning Win in Second Super Over Against Mumbai Indians in Dream11 IPL 2020, Virender Sehwag & Others go Ga-Ga Over ‘Universe Boss’ 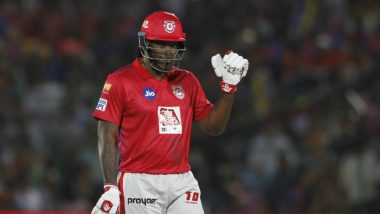 The Super Sunday was truly super as it gave away a full dose of entertainment for the fans in the Dream11 IPL 2020. Super Over was the word written all over the day as they had three Super Overs in a day. The first game between Sunrisers Hyderabad and Kolkata Knight Riders already ended up with a tie and in the second game, the Super Over between Kings XI Punjab and Mumbai Indians also ended with a tie. At the end, when the team needed 12 runs, Chris Gayle slammed a six and led the team to win in the second Super Over. The netizens were already happy about two Super Overs and then it was Chris Gayle who led the team to have the last laugh. Even Virender Sehwag hailed him on social media. MI vs KXIP Stat Highlights IPL 2020: KL Rahul Crosses 500 Runs in Season as Kings XI Punjab Beat Mumbai Indians in Historic Dual Super Over!

Before getting onto the tweets, let's have a look at how the game panned out for the two sides. So KL Rahul's team scored 176 runs and Mumbai Indians equalled the match. KL Rahul scored 77 runs from 51 balls and thus pleased the fans. KXIP walked in to bat once again and scored five runs.  MI ended up with the same score and the second Super Over also ended with a tie. Post this, Mumbai Indians walked out to bat and made 11 runs. It was Chris Gayle and Mayank Agarwal were the ones who led the team to a stunning win. Needless to say that the netizens went berserk with the inning and hailed him on social media.

Great save on the boundary and doing it with calmness with the Universe Boss in the second super over. What a Sunday !#MIvsKXIP

Chris Gayle is the first batsman to hit six in super over in IPL-2020.

With this, KL Rahul's team is on number six of the IPL 2020 points table. They have six points in their kitty. Mumbai Indians are still on number two of the 2020 IPL points table with 12 points.

(The above story first appeared on LatestLY on Oct 19, 2020 01:16 AM IST. For more news and updates on politics, world, sports, entertainment and lifestyle, log on to our website latestly.com).