The right-hander, who has been in fine form all season, once again gave a glimpse of why he is one of the most stylish cricketers around as he struck a delightful 98 unbeaten runs off just 42 balls to help Punjab Kings chase down 135 in just 13 overs. 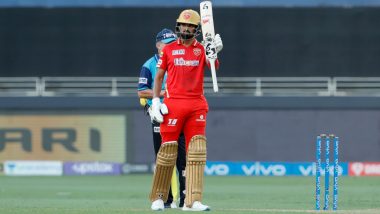 KL Rahul gave a glimpse of how dangerous a batsman he can be as he unleashed carnage (98 runs off just 42 balls) on Chennai Super Kings, helping Punjab Kings cruise to a six-wicket win in their last league game of IPL 2021 on Thursday, October 7. As a result of this win, Punjab have leapfrogged Mumbai Indians to the fifth spot on the points table and are somehow still alive in the race for the playoffs. Coming to the match, Rahul made things look really easy in the end, chasing down the 135-run target in just 13 overs. Chennai Super Kings on the other hand, succumbed to their third consecutive defeat and it is not a good sign for them ahead of the playoffs.IPL 2021 Points Table Updated

PBKS captain Rahul won the toss and opted to bowl first and his bowlers justified that decision by picking regular wickets, not letting CSK's highly-rated opening partnership and also the rest of the batting order to settle at all. They were brilliant on the field as well, holding on to their catches and at one point of time, had reduced to Chennai Super Kings to 61/5 at the end of the 12th over when a brilliant Ravi Bishnoi googly went through Dhoni's defenses and castled the stumps. But Chennai would have to thank Faf Du Plessis as his fighting 76 off 55 balls helped the three-time champions post a decent, if not competitive 135-run total. CSK vs PBKS Highlights Of VIVO IPL 2021: Punjab's Campaign Ends On High Note After Win Over Chennai

Despite Punjab losing wickets after a 46-run partnership between Rahul and his opening partner Mayank Agarwal, the Punjab captain made sure nothing came in his way of leading his side to an emphatic win. Meanwhile, take a look at some stats from the CSK vs PBKS encounter:

#With this win, Punjab Kings have now finished on 12 points for the fourth consecutive season.

#Chennai Super Kings have lost three games in a row for the first time this season.

Chennai Super Kings would aim to regroup quickly and regain their momentum ahead of the playoffs, where the level of competition would be more intense, given the fact that four top sides of the IPL this year would be part of it. For Punjab, they can just hope that Kolkata Knight Riders and Mumbai Indians both lose, in which case, they can stand a chance to make it to the playoffs.

(The above story first appeared on LatestLY on Oct 07, 2021 08:13 PM IST. For more news and updates on politics, world, sports, entertainment and lifestyle, log on to our website latestly.com).