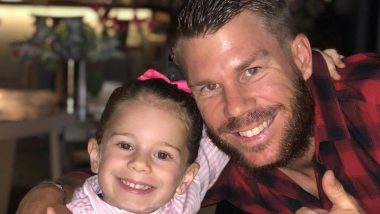 David Warner is a sheer entertainer. When not conquering the world with his cricket bat, Warner has been entertaining his fans with his latest TikTok videos. With no cricket action for the past two months, Warner has been keeping the smiles on his fans’ faces with extremely funny TikTok videos. Recently, the Australian opening batsman took to social media to share a gorgeous picture with daughter Ivy and also reflected on her growth. Warner’s daughters, including Ivy, have been part of most his TikTok videos and together as a family they have entertained the fans on social media. David Warner Raring to Get Back Onto the Cricket Field, Says ‘Sick of Shadow Batting in the Backyard’ (Watch TikTok Video).

Warner reflected on his daughter’s growth with a lovely caption to the wonderful picture. “This one is growing up so fast. A pic from the archives. Love my girls,” he captioned the image. In the picture, Warner and his daughter Ivy can be seen sitting in a restaurant as they pose for the picture. David Warner Grooves to Housefull 4 Song ‘Bala’ in Latest TikTok Video, Say ‘I’ve Got You Covered Akshay Kumar’.

This one is growing up so fast. A pic from the archives. Love my girls #ivy @candywarner1

Meanwhile, Warner recently reached three million followers on his Instagram page. The 33-year-old also took to Instagram and uploaded a TikTok video to thank his fans for the love they have showered on him. “Thank you for the support,” he wrote in an Instagram video.

Couple of days late but an appreciation post. Thank you for the support👍👍 #3m #roomtogrow

Under normal circumstances, Warner would have been playing for Sunrisers Hyderabad (SRH) in the Indian Premier League (IPL). The Australian opening batsman was named the captain for IPL 2020 and would have taken over reins from Kane Williamson. But the franchise T20 tournament was suspended indefinitely due to the coronavirus pandemic and the lockdown. Warner had also voiced his concern over the scheduling of the ICC 2020 T20 World Cup amid the outbreak.

(The above story first appeared on LatestLY on May 25, 2020 02:28 PM IST. For more news and updates on politics, world, sports, entertainment and lifestyle, log on to our website latestly.com).