Chasing 137, Delhi Capitals got over the line in the last over with two balls to spare. With this win, Delhi have now leapfrogged Chennai to top of the points table. 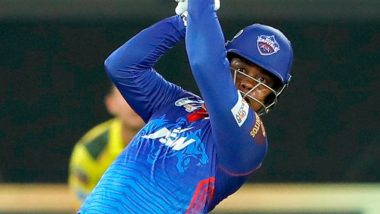 Delhi Capitals bowlers put out an impressive show with the ball before Shimron Hetmyer led his side to a thrilling three-wicket win over Chennai Super Kings in Match 50 of IPL 2021 at Dubai International Stadium. Chasing 137, Delhi Capitals got over the line in the last over with two balls to spare. With this win, Delhi have now leapfrogged Chennai to top of the points table. IPL 2021 Points Table Updated: Delhi Capitals Move to Top After Win Over CSK.

Delhi got off to a good start as Prithvi Shaw took two boundaries off Josh Hazlewood in the second over. But Deepak Chahar took him out in the next over. Shikhar Dhawan tore into Chahar in the fifth over, smacking the pacer for four boundaries in a row. Hazlewood took his first wicket of the match as Shreyas Iyer sliced a catch to cover in the final over of power-play.

Rishabh Pant smashed two boundaries. But he played one shot too many, top-edging a slog-sweep to point off Jadeja in the ninth over. Debutant Ripal Patel picked two boundaries off Jadeja. But Jadeja bounced back in his next over as Patel mistimed the loft to long-on. From there, Delhi slipped to 99/6 in 15 overs as Shardul Thakur dismissed Ravichandran Ashwin and Dhawan in the same over. DC vs CSK Highlights of VIVO IPL 2021: Delhi Capitals Secure Top Two Finish With Win Over Chennai Super Kings.

Shimron Hetmyer welcomed Dwayne Bravo in the 18th over with boundaries slammed over bowler's head followed by ball running to the rope after K Gowtham spilled a catch at long-on. In the next over, Hetmyer whacked a six over deep square leg off Hazlewood to bring the equation down to six in the final over. Bravo had Patel dismissed in the final over, driving straight to cover. Kagiso Rabada finished off in style with a clip through fine leg to seal a dramatic win for Delhi.

Earlier, Delhi put up an impressive show with the ball, with spin twins Ravichandran Ashwin and Axar Patel sharing three wickets for just 38 runs, conceding no boundaries. Chennai lost their prolific opening pair of Faf du Plessis and Ruturaj Gaikwad in power-play. While du Plessis pulled to deep mid-wicket off Axar Patel, Gaikwad, who had reversed a lbw decision off Anrich Nortje in the opening over, top-edged a pull on a pacy short ball to mid-wicket, giving the South African pacer his first wicket of the match.

Patel grabbed his second wicket of the match in eighth over as Moeen Ali's half-hearted flick was caught by deep mid-wicket. In the next over, Chennai plunged into deep trouble as Robin Uthappa's miscued slog was caught by Ravichandran Ashwin off his own bowling. Ambati Rayudu crunched Avesh Khan for boundaries through backward point and extra cover in the 12th over as he and MS Dhoni started to rebuild Chennai's innings.

# Delhi Capitals are the first team in IPL history to do the double over Chennai Super Kings and Mumbai Indians in the same IPL season.

# For the 11th time in a T20 Dwayne Bravo bowled his first over in the death of the innings and the third time in IPL 2021.

# Ravi Ashwin batted at number six for the third time in IPL.

Rayudu brought up Chennai's hundred in the 17th over with a full toss from Kagiso Rabada slammed down the ground. In the next over, Rayudu heaved Khan across the line for a boundary before bringing the half-century of the partnership in 55 balls with a full toss smacked over deep square leg.

Rayudu then slapped Nortje for a six over deep extra cover followed by a slash over point for four, bringing his half-century in 40 balls. Khan, who was hit for 32 runs in three overs, ended the 70-run partnership as Dhoni pulled but the bottom edge travelled behind to keeper Rishabh Pant. Khan conceded four in the final over to keep Chennai under 140.

(The above story first appeared on LatestLY on Oct 05, 2021 12:23 AM IST. For more news and updates on politics, world, sports, entertainment and lifestyle, log on to our website latestly.com).