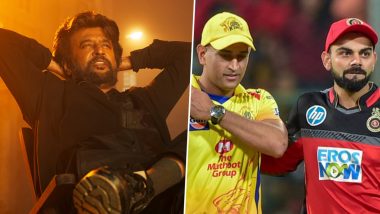 The 13th edition of the Indian Premier League (IPL), was originally scheduled for March 13 and then shifted to April 15, 2020, however, the cash-rich league has now been suspended until further notice by BCCI due to the coronavirus pandemic. In the meantime, to keep their fans entertained, IPL side Royal Challengers Bangalore came up with a unique concept of ‘Indian Poll League’ on social media but were trolled by Chennai Super Kings. Chennai Super Kings Takes a Sly Dig at Bengaluru Over Alcohol Sales, Says ‘We Are Glad We Lost That Match Even Before It Began’.

RCB started an India Poll League tournament on Twitter, which saw fans vote for a winner between the two teams. Just like the original competition format, the online league also comprised of playoffs and elimination to decide the finalists and eventually an ultimate champion. Brendon McCullum Highlights Major Difference Between CSK and RCB in IPL.

After 55 days of constant voting by fans, Sunrisers Hyderabad and Royal Challengers Bangalore were picked as the two teams for the finals, where the Bangalore side won by 85 per cent of votes. However, after the announcement, rivals CSK took a dig at the franchise by using a picture of famous actor Rajinikanth and reciting RCB’s famous tagline.

It is important to note that the two teams have contrasting histories in the competitions, despite having cricketing powerhouses such as Virat Kohli and AB de Villiers in their team, RCB hasn’t managed to win a single title while CSK are the second most successful side on the competition's history with three titles.

(The above story first appeared on LatestLY on May 26, 2020 07:13 PM IST. For more news and updates on politics, world, sports, entertainment and lifestyle, log on to our website latestly.com).