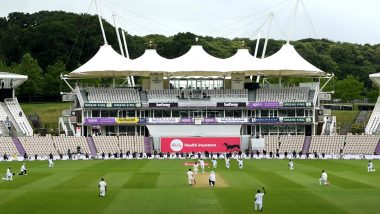 International cricket is back after a wait of close to four months as England and West Indies face each other in the first Test of the series. The match is being played at the Rose Bowl Cricket Stadium in Southampton. Ahead of the start of the clash, players from both the teams and the umpires took a knee for 30 seconds to show their solidarity and support towards the Black Lives Matter movement. Live Updates of ENG vs WI, 1st Test 2020.

This gesture has become synonyms with the BLM movement as sports stars around the globe are using the platform to take a stand against racial discrimination. Along with taking a knee, both teams announced that they will sport a ‘Black Lives Matter’ logo on their shirt during the first Test match between the two teams. Nasser Hussain Recounts His Experience With Racism and How People Called Him ‘Saddam’ (Watch Video).

Players and umpires took a knee before the start of play in support of the Black Lives Matter movement 💪 #ENGvWI pic.twitter.com/cwneMBOGxv

Ahead of the game, Michael Holding delivered a powerful message regarding the issue of racial inequality around the world. ‘Until we educate the entire human race, this thing will not stop for both blacks and whites,’ said the West Indies legend.

This gesture has also become a regular part of the English Premier League, as players, referee and managers in the competition have been showing their support towards the movement by kneeling on one ahead of each game. Teams in EPL also sported the words ‘Black Lives Matter’ on the back of their shirt instead of player names in the initial round of matches.

Speaking of the game between England and West Indies, the Three Lions elected to bat first after winning the toss. Ben Stokes will lead the team for this game in the absence of regular captain Joe Root, who missed the clash due to the birth of his second child.

(The above story first appeared on LatestLY on Jul 08, 2020 07:00 PM IST. For more news and updates on politics, world, sports, entertainment and lifestyle, log on to our website latestly.com).