Pat Cummins Says ‘It Was Like a Day Four or Five Test Wicket’, As Australia Lose 2nd ODI Against England 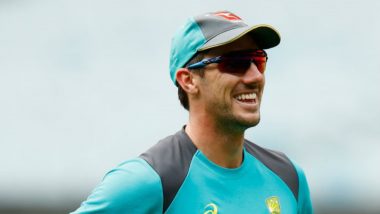 Manchester, September 14: After a 24-run defeat in the second ODI against England at Old Trafford, Australia pacer Pat Cummins said that it was a tough wicket to bat on and it looked like a "day four or five Test wicket" with variable bounce.

"It was a really tough wicket especially to start on, and unfortunately we just couldn't get through that period and couldn't finish it off. It was more like a day four or five Test wicket where it was a bit up and down. You saw some guys still bat quite well on it, once you're in you can get there, but also it felt like you could really squeeze [the run rate] and not that true bounce you expect over here," ESPNcricinfo quoted Cummins as saying. Also Read | Neymar Jr Accuses Alvaro Gonzalez of Racism During PSG vs Marseille, Spanish Defender Hits Back at Brazilian Forward.

Chasing 232, Australia got off to a bad start losing opener David Warner (6) in the fourth over of the innings as Jofra Archer had him caught by wicket-keeper Jos Buttler. Marcus Stoinis and Aaron Finch put on a brief stand of 28 runs, but the partnership was broken by Archer as he dismissed Stoinis (9) in the eighth over, reducing Australia to 37/2.

Marnus Labuschagne joined Finch in the middle and they put on 107 runs for the third wicket, but England staged a remarkable comeback as the side dismissed Labuschagne (48), Mitchell Marsh (1), Aaron Finch (73), and Glenn Maxwell (1) in quick succession, reducing Australia to 147/6. Also Read | Russian MMA Fighter Sergei Kharitonov Walks Out With a Bear on Boxing Debut, Defeats Mike Tyson’s Nemesis Danny Williams (Watch Video).

In the final overs of the England innings, Tom Curran and Adil Rashid added some precious runs to take the total past the 230-run mark. They put up a stand of 76 runs. Curran (37) was dismissed in the final over, but Rashid remained unbeaten on 35.

The speedster admitted that bowlers faced difficulty finding a perfect length in the death-overs and the visitors gave away too many runs in the final 10 overs. "On that wicket for 40 overs it felt like good-length bowling was the hardest to hit, and then suddenly they started hitting them quite nicely. We'll have a review for sure. I think we went for 80-odd runs in the last 10 overs," Cummins said.

"We're suddenly only chasing 200 and it's a different game. Adil and Tom are both really good batsmen, they might be batting nine and 10, but when they walked out we knew they could still hold a bat," he added. The three-match series is now levelled at 1-1 and the final game will be played at Old Trafford on September 16.