England vs Pakistan 2nd Test 2020: Joe Root vs Yasir Shah and Other Exciting Mini Battles to Watch Out in Southampton 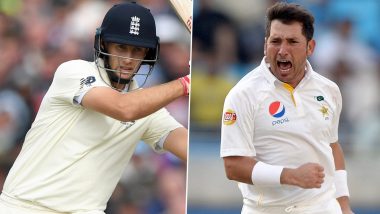 After a dramatic turn-around in the opening game of the series, England and Pakistan will face each other in the second Test. The clash will be played at the Rose Bowl Cricket Ground in Southampton on August 13, 2020 (Thursday). Joe Root and his team will be buzzing with confidence after their performance in the last game and will be hoping to replicate a similar kind of result. England vs Pakistan 2nd Test 2020, Match Preview: Ben Stokes-Less Hosts Look to Clinch Series in Southampton.

Individual brilliance has been the staple of England since cricket’s return as Chris Woakes became the unlikely saviour with the bat against Pakistan as along with Jos Buttler, he dug England out of a desperate situation and led them to a win. And it was Ben Stokes in the final game against the Windies, however, the hosts will be without the all-rounder as has opted out of the remaining two games due to family reasons. England vs Pakistan, Southampton Weather, Pitch Report & Rain Forecast.

Meanwhile, Pakistan put on a good show in their first competitive game post lockdown. The likes of Shan Masood, Yasir Shah and Shaheen Afridi put on more than promising displays but were unable to guide their side to a win. So as the visitors look to level the series, we take a look at some crucial mini-battles for the 2nd Test.

Joe Root has struggled since returning to action post lockdown as he has managed just one 50+ score in six innings. And with England losing one of their key members in Ben Stokes, the Three Lions captain needs to step up. Meanwhile, Yasir Shah was brilliant in the first game as he finished with eight wickets in the match and will look to build on that.

Stuart Broad has been an important feature of England’s bowling attack pas they have won all the Test matches he has been a part of post lockdown. The 34-year-old played a crucial role in the victories over Windies as well as in the last game. Shan Masood, on the other hand, registered his highest Test score in the first game but it was not enough to take his side to a victory.

Both the all-rounders had very contrasting times on the field in the first game. Where Shadab Khan struggled to make the desired impact, Chris Woakes turned out to be the deciding factor between victory and defeat. And in the second test, both the players could play a crucial role in determining the final outcome.

(The above story first appeared on LatestLY on Aug 13, 2020 08:00 AM IST. For more news and updates on politics, world, sports, entertainment and lifestyle, log on to our website latestly.com).